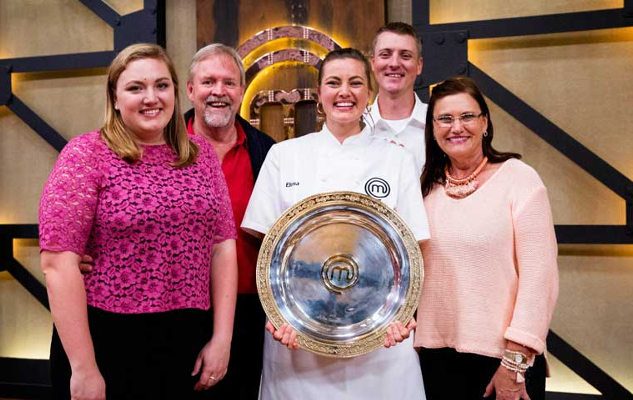 After an emotional and mouth-watering series of culinary battles, Elena Duggan has been crowned the MasterChef Australia 2016 Season 8 winner. The art teacher from New South Wales beat out coffee roaster Matt Sinclair following a grueling three-part battle that played out over the series’ final episode. Under the critical eye of judges George Calombaris, Gary Mehigan, and Matt Preston, the chefs got to work to see who would be worthy of the $250,000 cash prize and column in Australia’s leading food magazine, Delicious.

Round One: Hero Ingredients

The first challenge of the grand finale presented Duggan and Sinclair with ten ingredients, at least one of which they would have to hero during an hour-long cook.

Sinclair chose quail to hero and started on a corn and chorizo salsa with Pedro Ximenez wine glaze accompanied by a gremolata and red capscicum puree. Duggan went with the marron and crafted a dish of marron crisps with a smoked vegetable salad and dashi dressing.

The pair faced off on a knife’s edge, forced to balance the time limit against the complexities of their chosen dishes. Judge Mehigan threw an extra bit of tension into the mix when he commented on how Elena’s dressing didn’t seem to have enough complexity, suggesting she had taken on more than she could handle. Sinclair was down to the wire when, in a near-literal last minute inspiration, he scrambled to get micro herbs as a finishing touch.

When all was said and eaten, the judges found Duggan’s marron to be perfectly cooked. Mehigan even praised the dishes creativity and Preston really liked the crisps. Sinclair’s quail also went over well, with the judges thrilled by both its size and taste.

Round two, worth another 30 points, was a freeform cook-off with the time limit as the chefs’ only restriction. Duggan’s ambition from the first round shone through again as she decided to step things up and create a twice cooked lamb with macadamia nut puree, pickled beets, and vegetables. Matt, perhaps comfortable with his lead, stayed safe and played to his strengths with a crispy barramundi with sprouts, pancetta, and a prawn head broth.

Things initially didn’t seem to go well for Sinclair after Megihan expressed skepticism of the pancetta broth. Even worse was when Matt cut his barramundi and discovered it wasn’t fully cooked. With the clock ticking down, he had to go full throttle to make the needed corrections and stand a chance against Duggan.

All eyes were on the judges once it came time to eat. In a remarkable first for MasterChef, both finalists earned a perfect score—and Megihan was forced to admit he was wrong about the broth. Following the scoring, the chefs were given an emotional surprise as their family members were brought in to help inspire and support them ahead of the final dish.

With much fanfare and drumroll, international chefs Heston Blumenthal and Ashley Palmer-Watts revealed the final dessert challenge. It was an egg. Not just any egg, though, but a wickedly difficult verjus in egg dessert with coconut panna cotta as the egg-white, a mandarin concoction for the yolk, coffee parfait, and chocolate shell. Duggan and Sinclair had five and a half hours to create the 91-step dessert, and neither was going to back down now.

To say the final challenge was stressful would be an understatement. Duggan took a blow when she realized that she had added the gelatin for the “yolk” too early and was forced to try again with only half the ingredients. Sinclair couldn’t afford to get cocky though, especially not after his panna cotta—vital for keeping the egg together—failed to set correctly and needing a redo with just two hours left.

As the clock ticked down further and further, the final step was creating the chocolate egg shell. Duggan managed to pull hers off well, though trying to temper chocolate is difficult even without time pressure. Matt was scrambling with a thin shell and struggled to apply the liquid nitrogen that would freeze it into the final shape.

That’s when Duggan experienced what she described as “a moment of clarity”. The contest had been trying for all parties but Duggan wanted to be able to have fun and enjoy the final cook in MasterChef, so she crossed over and helped Sinclair with his liquid nitrogen to make sure his verjus in egg was finished in time. The display of camaraderie and sportsmanship moved the judges and audience alike.

Unfortunately, even Duggan’s help couldn’t stop what happened when it came time for the final judging. Sinclair wasn’t able to temper his chocolate correctly and his egg split apart on the plate. The visual appeal of the verjus in egg is a huge part of the dish, so this definitely hurt his score. Duggan didn’t escape critique either, though, with the judges noting that her own shell was too thick.

Ultimately, it was Elena Duggan who was crowned the MasterChef Australia Season 8 winner, beating out Matt Sinclair by a scant two points. It was an emotional (and delicious) roller coaster ride, and plenty of tears were shed. While Duggan is now $250,000 richer and will be appearing in Australia’s leading food magazine, Sinclair has earned the $40,000 second prize. Harry Foster, the third-place winner, won $10,000 as well.