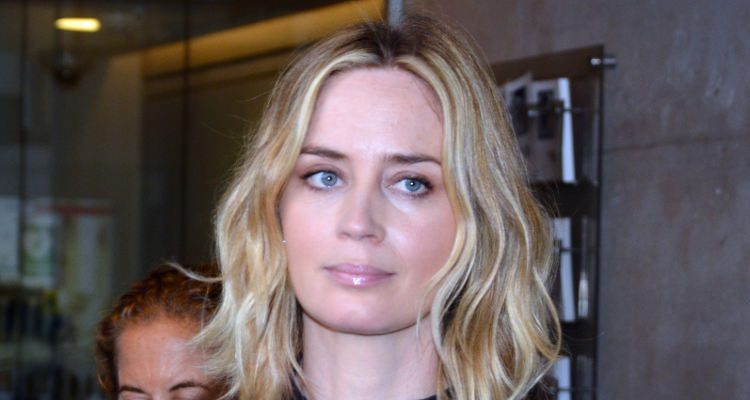 Hollywood bombshell Emily Blunt has left her admirers puzzled with her captivating figure in The Girl on the Train trailer.

She made her first appearance at the premiere of her husband John Krasinski’s upcoming film, The Hollars. She revealed her curvy figure in a white David Koma sheath dress, and her husband could hardly take his eyes off his love.

“I have no idea,” Krasinski told ET when asked how Blunt looks so incredible just two months after giving birth. “And it’s just frustrating because even I have to work way too hard to look even like this, and she just does it by waking up.”

Blunt told C Magazine earlier this year, “The first pregnancy is the most self-indulgent thing in the world because you get massages and prenatal yoga and hypnotherapy CDs. During this one, I forget that I’m even pregnant. I’m hoisting a 2-year-old around!”

Us Weekly reports that Blunt worked out during her pregnancy, which helped her get back in shape, sooner, post-pregnancy.

Her prenatal exercises would have been light exercises like yoga and walking.

Blunt’s enviable physique is a combination of healthy eating, intense exercise and a well-rounded routine. She readily accepted the challenge of transforming her image for her character in Edge of Tomorrow, which others would hardly dream of doing.

Her personal trainer Jason Walsh helped her cope with the gruelling demands of her role.

Walsh uses a three-part circuit workout to get the heart rate up and tone your inner base strength. The training begins with five to 10 minutes of light cardio and stretches. The circuit lasts for 25 to 30 minutes and requires equipment like dumbbells, a small step and a pull-up bar.

Ahead of her July 2010 wedding, Blunt told HollywoodLife, “I’ve been working out more recently. I really like doing Pilates as well and yoga and all those lengthening exercises … probably like four, sometimes five times a week!”

The expectant mother reportedly consumed a healthy diet, which was comprised mainly of carbohydrates and proteins.

She relished carbohydrate-filled breakfasts and her lunch and dinner consisted of grain proteins and probiotics. She relied on a gluten-free diet and sipped one cup of coffee a day.

She says her healthy regime is cutting out nutrient-deficient things like pizza.

The following is a sample meal from the Jason Walsh Programme

Miso soup with a brown roll

Salmon with steamed asparagus and broccoli

A routine of good sleep, a keeping oneself hydrated throughout the day and consuming nutrition-dense meals accompanied by light workouts will surely help to get back in shape in post-pregnancy.