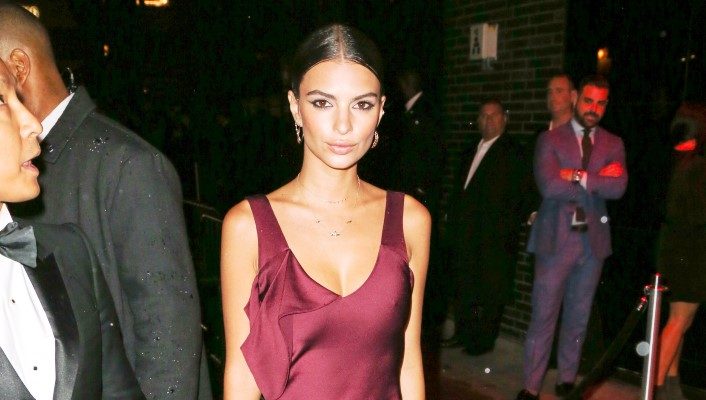 The picture was taken next to a window, overlooking a wonderful view. She captioned the image as “Staycation dreamin.” It seems like the 25-year-old had a good night’s sleep as she looks well rested.

Emily Ratajkowski became a global sex icon pretty soon after her steamy appearance in the “Blurred lines” video. Hollywood took notice of this brunette and soon she was cast along big names like Ben Affleck and Rosamund Pike in Gone Girl. Ratajkowski’s fitness and sex appeal helped her to have a smooth transition from retail ad work to art house erotica and high fashion.

Recently, she was spotted at the Golden Globe Awards event. Ratajkowski looked absolutely stunning in a silky yellow Reem Acra gown, which was slashed between the midriff and had a dramatic front slit through which she flashed her gorgeous legs. Here is a pic she posted on her Instagram account from the awards show.

Ever since her “Blurred lines” days, Emily Ratajkwoski’s fans wonder the secret to her incredibly slender and toned figure. Well, the model has spilled the beans in an interview with ELLE.

Emily Ratajkwoski doesn’t have a tight diet plan, however, she revealed that she is a hardcore meat eater. She said that she craves iron and so salads are really not her thing. She also shared with The New York Times that she eats foods that make her feel good. She believes that it’s okay to treat herself to a cupcake or a morning croissant once a while.

Ratajkwoski keeps a check on her sugar and salt intakes, and her daily diet includes all the right kind of food like fresh fruits, vegetables, lean protein, and whole grains. Her favorite juice is turmeric and beetroot which is one of the reasons behind her flawless skin.

As for her workout routine, Emily Ratajkowski does it all without the help of a personal trainer. She isn’t a fitness freak, but likes to stay healthy and fit. Surely this beauty got lucky with the genes, but she isn’t a slacker.

Ratajkowski hits the gym quite often and does cardio exercises to sweat it out. She also loves to go hiking and take long walks with her friends. The actress also swears by yoga, which is a big part of her fitness regime. However busy she might be, Ratajkowski manages to squeeze yoga classes into her busy schedule.

Looks like Emily Ratajkowski lives life in moderation. Her frivolous approach to fitness routine is quite admirable as it is evidently working in her favor. The model has an enviable figure and is a popular choice for a number of coveted lingerie labels, like Yamamay and Intimately Free People.