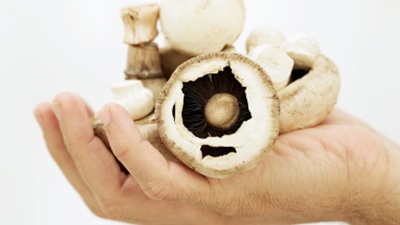 The latest diet fad people are talking about is using magic mushrooms to lose weight. Apparently, some celebrities have used this technique to lose weight and it has become quite popular. The nutritional technique involves substituting one meal per day with mushrooms. Not only are unnecessary pounds being shed but the proponents of this diet claim that they have been able to selectively lose body fat around the waist, hips, and thighs, but not around the chest! Does the mushroom diet sound too good to be true?

The mushroom diet involves eating one meal per day consisting only of mushrooms for 14 consecutive days. According to registered dietician K. Tallmage, “experts say that there’s nothing magical about mushrooms—replacing one meal a day with any vegetable would help a person lose weight.” She also comments that the claim about selective weight loss doesn’t hold up to science, saying “there’s no evidence that any diet … will help you lose weight in a particular spot.” I would have to agree with Tallmage on this point.

Although there is evidence that women can lose weight on the mushroom diet, the real reason why this is happening is because of caloric substitution, meaning replacing high-calorie or high-glycemic foods which cause weight gain with low-calorie, low-glycemic mushrooms. The mushroom diet also claims that it can help you selectively lose body fat intargeted areas such as the waist, hips, and thighs.

The simple fact remains that a diet like the mushroom diet will naturally target certain areas first, and by consistently restricting your caloric intake, your body will lose weight or fat from certain areas and, like the proponents of the mushroom diet advocate, your body won’t lose fat from other areas, such as the breasts. Eventually, as you continue on this diet in an attempt to lose weight, your body will naturally lose fat from the breast as well.

Excessive abdominal fat is really the type of body fat that you should be concerned about. Subcutaneous fat which occurs around the hips, legs, and arms is not as consequential relative to health risk as the fat around your waist. In women, this type of dangerous fat accumulation can be caused from the aging process, lifestyle dynamics, and reduced insulin sensitivity.

As most fad diets go, this mushroom diet is just another one that has no scientific basis in fact. Using a fad diet for 14 days is not a relevant test to how effective and safe this strategy is to lose weight or prevent obesity in the long term. It simply represents another “quick fix” that celebrities use so they can fit into their new designer dress they are planning to wear on the red carpet.

In my opinion, the mushroom diet is not a healthy way to lose weight in the long term. Instead, you should focus on healthy eating, healthy living, and exercise to truly benefit.