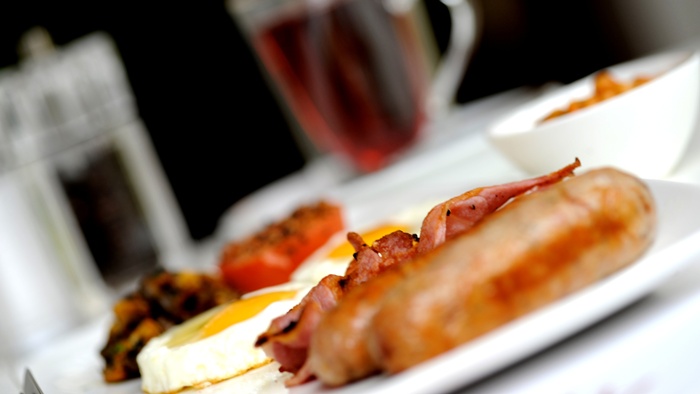 A few days ago I was at the gym doing my usual training routine. While I was sitting on the stationary bike, I began a conversation with someone regarding breakfast foods (and the temptations of bacon).

We got talking about a new restaurant that just opened across the street. I’d eaten there and found that it was good. We continued chatting away and he told me about some of his favorite breakfast foods. Not surprisingly, like so many North Americans, those foods included the usual fattening meats such as sausage, bacon and ham. The thing about this particular man was that this was his breakfast every single day.

Bacon has a Darker Side

What most people don’t even realize is that their typical breakfast often contains foods that are dangerous if they are consumed regularly. Sausage, ham, deli meats and bacon are likely a few of the worst offenders, too.

Bacon has made a comeback as a popular addition to almost every dish. Maybe you have heard of “bacon cheesecake” featured in local bakeries?

While I certainly know that bacon is rich, salty and delicious, I am also fully aware that the effects of such a meat on your health can be truly detrimental.

Research that appeared in the journal Circulation revealed that over a 12-year period, the consumption of deli meats like sausage, ham and prepared meats was associated with an increased risk of heart attack and death from heart disease for adult males. Women were not a part of the study group.

For every 50-gram increase in the consumption of prepared meats, researchers found a linked increase in the risk of heart attack and death. This relationship between the consumption of prepared meats and heart disease remained significant despite accounting for weight, food intake, caloric intake and other heart disease risk factors of the individual.

By contrast, no ill effects were seen with the consumption of non-processed meats such as whole cuts of beef, pork or veal.

Participants in other similar studies who have consumed the highest amounts of prepared meats typically have the highest rates of stroke, cancer, cardiovascular disease and early mortality. So if you needed a good reason to stay away from processed meat, you definitely have one now.

With risk factors like cancer, heart disease and early death a possibility, beware the types of meat you consume. Meat and protein are great for your health, but you need to be careful where it comes from, and processed meat is simply no good.

Prepared meats are also high in sodium which can increase your blood pressure and your risk of cardiovascular damage. They are also high in saturated fat which can cause increased levels of cholesterol, inflammation and insulin resistance. These are all factors that can seriously damage the inside of your arteries.

Prepared meats contain high amounts of chemicals called nitrates which have been associated with cancer cell growth of the digestive tract, too.

So what to eat for breakfast? Instead of the processed meat, try a couple of organic eggs, a few ounces of pan-fried flank steak and a slice of whole-grain toast. You get all of the flavor and none of the risk!