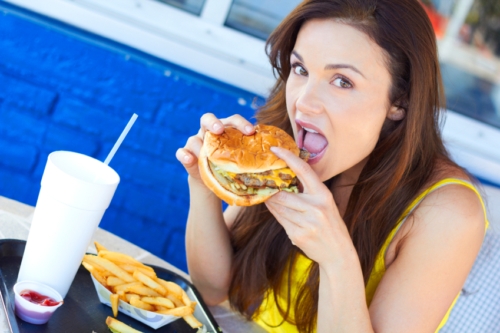 According to a new study conducted by researchers at George Washington University’s Milken Institute School of Public Health, chowing down on fast food could potentially expose diners to dangerous chemicals known as phthalates which could lead to adverse health effects.

An advanced publication of the study was published today in the journal Environmental Health Perspectives – it’s the first study of its kind to observe fast food consumption and phthalates exposure.

Phthalates are essentially chemicals used to produce food packaging materials. The problem is—sometimes chemicals can seep out of packaging and contaminate processed foods.

For the study, researchers analyzed data from 8,877 subjects who answered questions about their dietary habits (including how much fast food they ate) within the previous 24-hour period. Study participants also gave researchers urine samples that were then tested for the breakdown of the phthalates known as DiNP and DEHP.

Fast Food and PhthalatesResearchers discovered that participants had a higher exposure to phthalates when more fast food was consumed. People who consumed the highest amount of fast food had nearly 24% higher levels of the breakdown for DEHP in their urine. Of these participants, about 40 % had increased levels of DiNP metabolites in their samples compared to participants who didn’t eat fast food within the 24-hour period before testing.

Grain products (i.e. bread, cake, pizza, burritos, noodles, etc.) and meat products were the most substantial sources of phthalate exposure, according to researchers.

Researchers suggest that study findings raise concerns since phthalates have been linked to health problems in both adults and children. Previous research on the adverse health effects of being exposed to phthalates suggest they can damage the reproductive system, disrupt hormones and interrupt growth development.

Study researchers suggest that more research needs to be done on the association between health problems and phthalates in fast food—but any concerned individuals should opt for more fruits and veggies and less fast food.

To further reduce exposure to phthalates, experts from the Pediatric Environmental Health Specialty Units network suggest purchasing fresh or frozen fruits instead of processed foods, using glass or ceramic to store food instead of plastic and to avoid microwaving food in plastic containers.