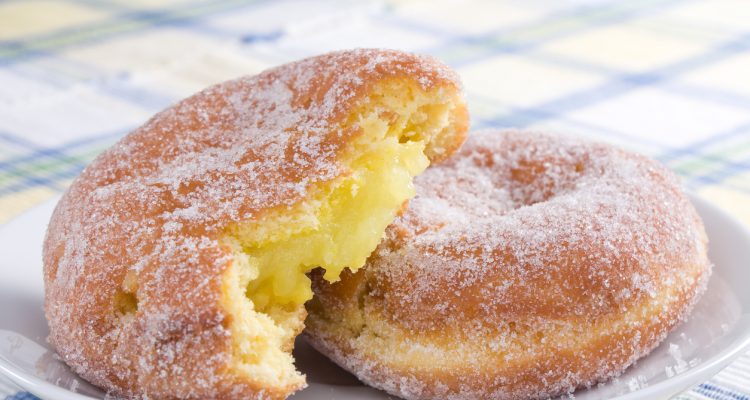 In addition to king cake, paczki is another rich and savory sweet which is feasted on before the season of Lent. Paczkis are fried dough pastries traditional to Polish cuisine and similar to doughnuts. In Poland, they are eaten on Fat Thursday, the last Thursday prior to Ash Wednesday, and the beginning of Lent. In U.S., they are consumed on Fat Tuesday, also called Paczki Day or Shrove Tuesday.

Since they are deep fried, those who are health-conscious would definitely want to know how many calories are in a single paczki. They are made from rich dough containing eggs, fats, sugar, yeast, and milk. They have traditional fillings such as strawberry, Bavarian cream, blueberry, custard, raspberry, and apple.

This deep fried pastry with a sweet filling and dusted with icing sugar, orange zest, or drizzled with glaze surely has a high amount of calories. The calorie content depends on the way they are made and the type of filling used. A single paczki contains 300 to 450 calories and around 15 to 24 grams of fat!

The high-calorie content should not stop you from indulging in this sweet, especially on Shrove Tuesday 2017, since you have the opportunity to make up for it by fasting for the next 40 days!

They were invented to use up stocked foods like sugar, lard, eggs and fruit, which are generally avoided during the Lenten fast. It’s also a better way to control any cravings for the 40-day fasting period.

Their roots date back to the Middle Ages, and they were filled with pork fat and fried in lard.

In ancient times, the rich dined on roasted game and other delicacies while the poor had cabbage and jellied pigs knuckles. Paczkis were the only thing which both of them could enjoy.

Fat Tuesday is known as Paczki Day in cities like Cleveland, Detroit, Green Bay, and Chicago. Local bakeries sell tens of thousands of paczkis, and people line up early in the morning to get them. Celebrations include parades, eating contests, and drinking.

People even have a paczki-eating competition. The record stands at 22 pastries in 10 minutes by a person in Hamtramk, near Detroit, Michigan.

Paczkis contain a small amount of alcohol which helps the pastry avoid absorbing too much fryer grease.

Army Armstrong Films made a documentary about paczki-making in Lorian County, Ohio.