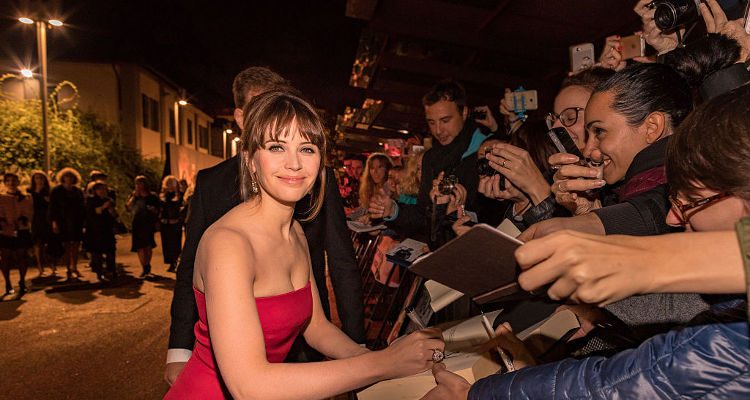 Felicity Jones is set to appear in Star Wars: Rogue One which will be released this December. Jones beat out Rooney Mara, Tatiana Maslany, and many other actresses to land the role. It seems that Disney Studios Chairmen Alan Horn was not only impressed by Jones’ acting abilities, but how physically strong she is, despite being so petite in size.

To stay fit and strong Jones practices boxing, enjoys swimming and yoga, and eats a lean protein diet. Read on to find out more about Jones’ diet and workout plan.

Even though Jones’ career is picking up, meaning she is much busier, she still doesn’t forget to eat right and exercise. For having a small frame, Jones is quite strong and has plenty of energy in order to get through a filming day.

From the start of her day, Jones makes sure she eats breakfast which is packed with nutritious foods whether it be an omelet, oats, or bread, with tea or fruit juice. From there, she sticks with a lean protein diet such as chicken or fish, along with fruits and vegetables. For dinner she tends to have more chicken and fish, alongside a soup.

When it comes to snacking, Jones still remembers to stick with healthy choices including nuts, yogurt, or fruit. But don’t be fooled, all this good eating only makes way for her cheat snacks, which she enjoys once a week. These include potato chips, muffins, or even burgers.

Although Jones is naturally slender, she still exercises and remains physically fit in order to maintain good health. Jones understands the importance of regular exercise, but also knows when to take a day off when she is feeling tired. She won’t push herself if she just isn’t feeling up to working out.

Unlike some other actresses, Jones’ workout routine isn’t strict, and her overall attitude towards exercise is pretty relaxed. She has admitted to enjoying exercise classes when in East London, and some of her favorite classes include box fit – a boxing-style workout class – swimming, and yoga, which helps her unwind.

Soon we will be able to see Felicity Jones in the leading role in Star Wars: Rogue One. This is different for Jones’ usual dramatic roles, which were not as physically demanding as this one. We have no doubt that Jones’ healthy eating and workout regimens will pay off in the latest Star Wars movie.