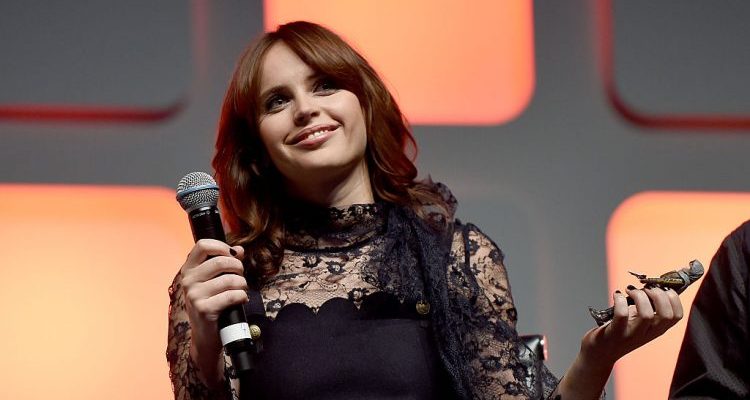 (Photo by Ben A. Pruchnie/Getty Images for Walt Disney Studios)

Actress Felicity Jones looks outstanding in her Jyn Erso role during the Star Wars spin-off’s official Rogue One trailer. Rogue One: A Star Wars Story is scheduled to hit theaters Dec. 16.Another female Star Wars star had nothing but praise for the 33-year-old Jones. Daisy Ridley starred in 2015’s Star Wars: Episode VII – The Force Awakens.

The 24-year-old Ridley says that Felicity Jones is a phenomenal actress and needs no advice. The two Star Wars women recently hung out, and Ridley admits that Jones is a really nice and cool person.

Although Ridley is just beginning her acting career, Jones has a few more acting credentials to her name. Jones is best known for her role as Jane Hawking in the 2014 Stephen Hawking biopic, The Theory of Everything. Jones also starred in 2014’s The Amazing Spider-Man 2 and 2011’s Like Crazy.

What is Felicity Jones’ Fitness and Workout Routine?

The life of an actress can be exhausting with long days. As a result, the English actress doesn’t force herself to exercise when she is too tired and prefers a relaxed mentality on exercise rather than being so intense with her workouts. Felicity Jones’ fitness and workout routine is fairly relaxed. It includes various exercise classes at a place in East London called Frame. Her favorite class is called box fit, and she also enjoys swimming and yoga.

Although Felicity Jones has a slight frame, she is actually quite strong. She may not have a personal trainer or a particular workout routine, but she does get into shape in her own way.

Although the Rogue One star doesn’t follow a particular diet, she still makes sure that what she eats is healthy. For instance, she is said to never miss breakfast. After all, many consider breakfast the most important meal of the day. Her breakfast might include oatmeal, an omelet, and whole-wheat toast with juice or tea. Oats and eggs are powerhouse protein sources and will leave your body feeling full for a longer period of time.

For lunch, Jones may consume some kind of lean protein like fish or chicken, along with vegetables and fruit. Felicity Jones will often consume a tuna sandwich or chicken with a fresh bowl of soup for dinner. In between meals, Jones might eat nuts, fruit, and yogurt. However, sometimes Jones will give into her cravings and consume cheat food favorites like burgers, potato chips, and muffins.

Felicity Jones’ diet sounds very similar to the paleo diet, which is mostly meat and vegetables. It is a low-carb and high-protein diet that will increase muscle mass, boost metabolism, reduce the risk of type 2 diabetes and inflammation, and suppress appetite.

Rogue One: A Star Wars Story is considered a standalone Star Wars film and will not have any sequels attached to it. The film will follow the story of a Rebellion soldier and criminal named Jyn Erso. Mon Mothma gives Jyn Erso the challenging mission to steal the plans for the Death Star. Rogue One will also star Mads Mikkelsen, Ben Mendelsohn, Diego Luna, Genevieve O’Reilly, and Forest Whitaker.

Russian, A., “Daisy Ridley Has No Advice for Felicity Jones Ahead of Rogue One: ‘She is a Phenomenal Actress,’” People Movies website; http://people.com/movies/daisy-ridley-has-no-advice-for-felicity-jones-ahead-of-rogue-one-she-is-a-phenomenal-actress/, last updated Oct. 21, 2016.