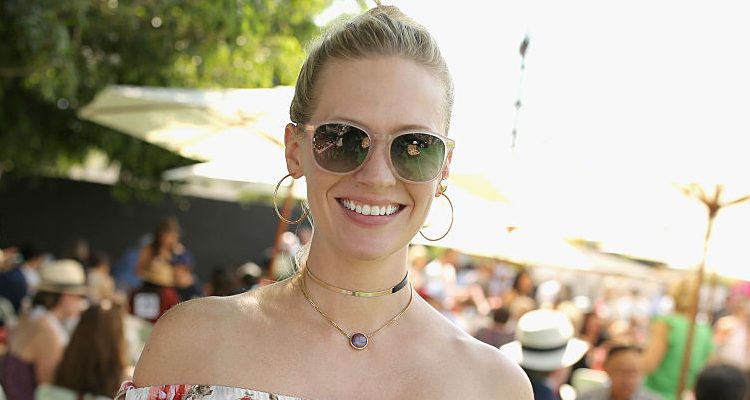 Known for her role on Mad Men as Betty Draper, January Jones is embracing being a single mother fearlessly, and looking fit while doing it. The actress, 38, is raising son Xander, 5, without the help of a partner and has yet to reveal the identity of the boy’s father. However, she has been candid about the challenges and rewards of raising her son on her own and recently addressed them in an interview with Red magazine. She admitted to worrying a little over Xander being surrounded by women most of the time but stated she is grateful that her father and other dads from the neighborhood spend time with him and are good male influences. In the same vein, she’s also happy that many of her son’s role models are strong women and feels that this will help him grow up with a respectful attitude towards women in general.

Jones seems to have mastered the work-life balance in a way that allows her to excel in both her career and at home. She’s currently shooting and starring in the dark comedic series, Last Man on Earth, but still manages to be home by 5 p.m. every night to spend the evening with her son and put him to bed. Somehow, between acting steadily and raising her son, she’s still managed to find time to keep herself looking great. Read on to learn about her favorite diet and exercise tricks that keep her looking her best even with such a hectic schedule.

While she’s the first to admit that she doesn’t like to exercise or work out regularly, Jones has managed to fit in a few activities to help keep her in shape that she really enjoys. Swimming, hiking, and Cardio Barre classes are just a few of the ways she gets in some regular activity while still having fun. All three are great for improving your cardio as well as toning your muscles. Cardio Barre, especially, has helped Jones gain healthy muscle mass by combining ballet-inspired moves with light strength training and conditioning.

When it comes to food, Jones prefers to follow a moderation diet so she doesn’t deprive herself of the foods she loves. Using portion control as well as being sure to eat a healthy, balanced diet the majority of the time allows her to cheat every once in a while and enjoy traditionally unhealthy foods like burgers and pizza. She posted a picture to her Instagram this past Thursday of her birthday dinner with not a vegetable in sight.

Enjoying foods like these in moderation allows her to splurge when the mood strikes without feeling guilty, and helps to keep her in shape.

Despite leading such a busy life, January Jones has her priorities straight. First and foremost, she does her best to be a great mother and role model for her son. Everything else comes after, including her figure which she maintains by finding fun ways to be active and enjoying everything in moderation.