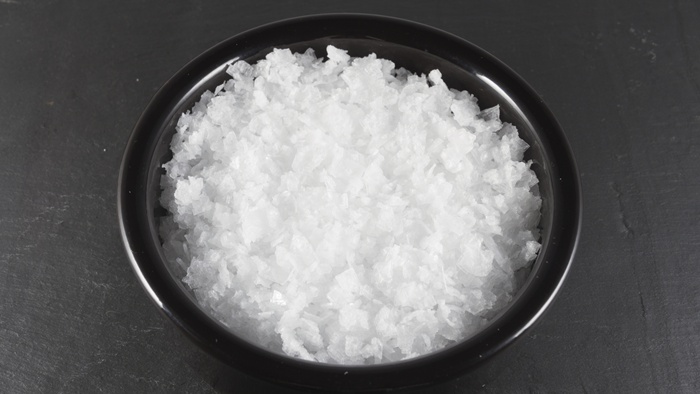 Just because your meal is a healthy one doesn’t mean it needs to be boring! Adding a little salt can give your food the salty extra you crave (without succumbing to less healthy options).

Salt is also important for your health because it contains nutrients your body can’t produce, like sodium and chloride. There are so many types of salt available. Kosher salt and sea salt are go-to favorites among healthy eating aficionados, but which type of salt is better for your body?

Kosher salt is considered salt in its purest form and it has no additives. Any pure salt would be considered kosher. Kosher salt is used to satisfy dietary religious law, including Judaism. The blood from an animal must be removed for a proper kosher classification. If this is the type of salt you use typically, you know to look for the 100% kosher symbol.

The processing of sea salt and kosher salt is considered minimal for both. From a nutritional standpoint, often a quarter teaspoon of pure kosher salt will contain around 480 mg of sodium, but in some cases it could be more or less. The coarser the kosher salt, the less sodium content it may have.

Sea Salt from the Ocean

Sea salt is obtained from the ocean, and it often retains more nutrients than other salts. You may find trace levels of calcium, potassium, magnesium and other nutrients in sea salt, which remain after the seawater has evaporated.

Sea salt will usually contain some iodine, whereas the purest forms of kosher salt will not contain iodine. Sea salt will contain between 390 and 590 mg of sodium in a quarter teaspoon.

The sodium content in both salts is comparable and salt in general should be limited for people with high blood pressure or hypertension. People only require between 1,500 and 2,300 mg of sodium on a daily basis. One thing that needs to be considered is whether or not you feel you are lacking iodine in your diet. If this is the case, you may benefit from sprinkling some sea salt on your favorite dishes.

Sea salt also will retain various nutrients from the seawater. But if you are curing meat, kosher is the salt to use. Also remember that when you use kosher salt for cooking, there will be less sodium content because the coarse granules will not clump together compared with fine salts.

Kosher salt may contain less sodium when used for cooking; however, sea salt is the salt supreme for its taste and several additional minerals. It’s a salty debate, but the winner is sea salt.

Which salt will you choose? It comes down to taste and moderately seasoning your food. Remember that you only want to add a little bit for flavor. With various other salts available, should sea salt have another competitor? Himalayan crystal pink salt anyone?
Sources:
Beck, L., “Table, sea or kosher: Which salt is healthiest?” The Globe and Mail website, April 8, 2013; http://www.theglobeandmail.com/life/health-and-fitness/ask-a-health-expert/table-sea-or-kosher-which-salt-is-healthiest/article10812924/, last accessed April 10, 2013.
“What is the difference between different types of salt such as kosher salt, sea salt, iodized salt, and regular salt?” The world’s healthiest foods website; http://www.whfoods.com/genpage.php?tname=dailytip&dbid=4, last accessed May 29, 2014.
Clarke, N., “Does Kosher Salt Have Less Sodium?” LIVESTRONG.com website, Sept. 1, 2011; http://www.livestrong.com/article/531609-does-kosher-salt-have-less-sodium/.
Coleman, E., R.D., L.D., “Does Sea Salt Have Iodine in It?” LIVESTRONG.com web site, March 16, 2014; http://www.livestrong.com/article/253747-does-sea-salt-have-iodine-in-it/.