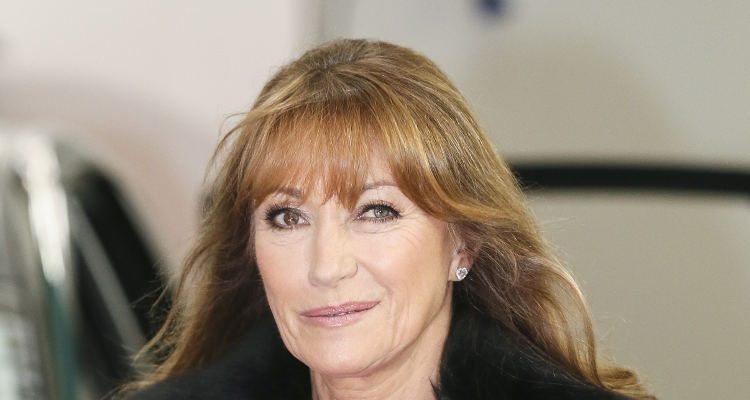 Former Bond Girl and actress Jane Seymour defies age with a toned body that most women could only dream of obtaining.

The 65-year-old showed off her figure in a scarlet dress at the ITV studios in central London, ahead of her appearance on This Morning.

Seymour reached stardom following her performance in the Roger Moore James Bond movie Live and Let Die in 1973. Seymour is also known for her role as Michaela Quinn in the TV series Dr. Quinn, Medicine Woman and the hit 2005 comedy- movie Wedding Crashers.

Seymour chatted with Phillip Schofield and Holly Willoughby on the This Morning talk show about how she maintains her youthful looks. Seymour revealed her healthy diet of vegetables, fish, and chicken. She also avoids red meat, but does drink wine once in a while.

The Gyrotonic Expansion System combines the Gyrotonic and Gyrokinesis exercise methods, originally known as “Yoga for Dancers.” The Gyrotonic method uses specialized equipment that helps one move with resistance, while Gyrokinesis is performed using a mat and chair.

Seymour also says that her skin is natural, and she prefers not to get Botox. After all, she is an actress and wants to maintain an expressive face.

Still, Seymour got breast implants in 2007 before going topless for a movie role, although the implants were considered unusually small by Hollywood standards. She also had an eyelift more than 10 years ago.

Seymour also appeared on the talk show Lorraine last week with actor Michael Landes to talk about their new TV series called Hooten and the Lady. Seymour plays Lady Tabitha on the eight-part drama series. Seymour also talked about her age-defying beauty secrets while on Lorraine.

Seymour likes to keep her diet simple. Besides avoiding cigarettes and limiting caffeine, she eats organic vegetables and fruits and has her own chickens and eggs.

Basically she has a clean diet, but doesn’t obsess over it. She is also not a big dessert lover; however, she often consumes a piece of dark chocolate at the end of her day.

She also grows her own produce and consumes blueberries, blackberries, ginger, apples, carrots, and kale. She also eats fish and salad with a homemade vinaigrette dressing and drinks a lot of water.

Seymour says her lifestyle is a result of combining western and alternative medicine and listening to her body. Her mantra for life is that beauty comes from within. Her mother once told her that there are always people worse off than her, and it is a good thing to give back to others. Seymour gives back through her Open Hearts Foundation, which honors individuals each year with inspiring stories.

Seymour is also a great believer in homeopathy. She uses remedies like arnica and Oscillococcinum, and has even written the forward for the book Homeopathic Remedies, which is a homeopathic remedy reference book by her naturopathic doctor, Asa Hershoff. Seymour’s sister Annie Gould is also a homeopath in England.

As mentioned, Jane Seymour’s workout include Pilates and Gyrotonics, but she also enjoys walking from time to time. She also uses the reclining bicycle and the elliptical machine to get her heartbeat up. It is no wonder Seymour is able to maintain her fit figure without ever having to exercise or diet for the purpose of weight loss.