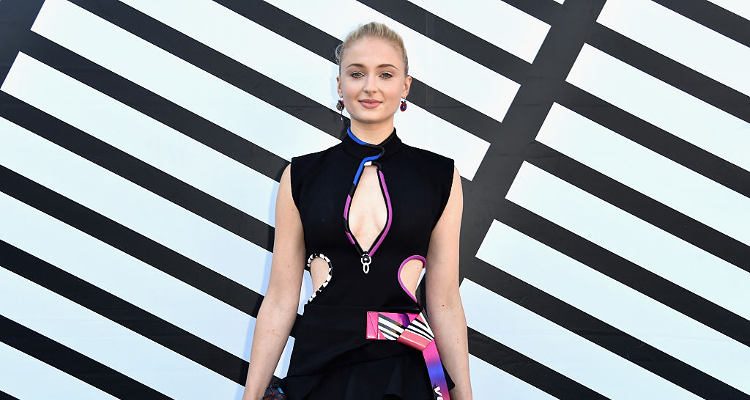 Actress Sophie Turner is internationally recognized for her role as Sansa Stark in the HBO fantasy TV series Game of Thrones. The Game of Thrones cast is getting ready for the seventh season of the show. The 20-year-old Turner had a different look during Paris Fashion Week. She showed off her fit body in an eclectic black mini dress that was designed by Louis Vuitton.

Turner’s ensemble featured a keyhole neckline with brightly colored trim and white side panels that showed off her slim legs. Turner has been booking a lot of roles recently; earlier this year, Turner starred as Jean Grey in X-Men: Apocalypse and her upcoming projects include dramatic films Alone and Huntsville.

Since the age of 13, Turner has starred as redhead Sansa Stark. Turner has matured during that time, and her character evolved from a people pleaser to a confident woman poised to reclaim her family’s power.

Turner is required to be is great shape for many of her roles, and has always had an athletic mindset. At age 11, she was on track to become a ballerina; however, she opted to turn down London’s prestigious Royal Ballet School to pursue acting. The stamina and discipline from ballet helped prepare Turner for the role of Jean Grey, who is a mutant with telekinetic strength.

To prepare for X-Men: Apocalypse, Turner worked out for an hour a day, six times a week. Turner was required to train extra hard to fit into a skin-tight superhero costume for the X-Men movie. As a result, she changed from an actress without a workout routine into a true athlete. The movie studio connected Turner with celebrity trainer James Farmer.

Turner often works out outside, which suits her better than working out in the gym. Her trainer says the actress is physically and mentally strong. Farmer has also taught Turner complex boxing moves. The boxing provided Turner with cardio, and helped her establish a strong mental and muscle connection.

Turner has also tried barre classes, which combine stretching and strengthening exercises to help sculpt and develop muscles. Exercise has helped Turner feel more positive about her body while feeling stronger, and more like Jean Grey.

Turner’s trainer also revamped her diet routine with a low-carb Paleo diet. When Farmer met Turner, she didn’t eat breakfast, and she wasn’t eating enough of the right types of food. Turner now consumes a good source of protein with healthy fats at every meal. Protein sources include fish, beef, turkey, chicken, eggs, and game meat, while she consumes healthy fats like nuts and olive oil. She also eats a lot of fiber-rich vegetables like cauliflower and spinach, and starchy veggies like sweet potatoes.

The change of diet routine was a welcomed transformation for Turner. The new diet gave her more energy. A low-carb and high-protein diet increases muscle mass, boost metabolism, reduce inflammation, suppress appetite, and the lower the risk of type-2 diabetes.