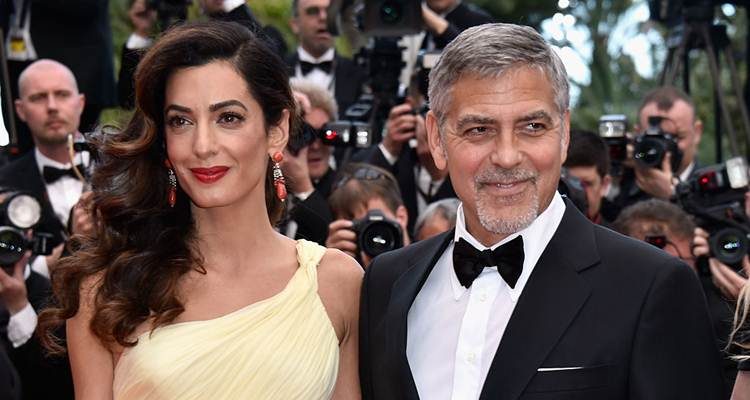 George Clooney and Amal Clooney stepped out for a date night, and Amal revealed plenty of skin in a lace cropped-top.

George Clooney’s age is 55, but he still manages to look as hot as ever, proving that age is merely a number. The Hollywood couple both looked fit while they headed out for a double date with pals Cindy Crawford and Rande Gerber.

Clooney is a sex symbol in Hollywood, and it’s thanks to his continued healthy eating and regular workouts.

Clooney maintains a youthful persona, and even though we all thought he would be a bachelor forever, he married Amal back in 2014. Clooney adheres to a healthy lifestyle and hasn’t been under the knife, unlike many other top Hollywood celebs.

To remain a hot commodity in Hollywood, Clooney remains fit and healthy. Clooney is known to change up his workout routines in order to fulfill the requirements for his movie roles. For example, his training for the film The Assassin was quite intense and involved Clooney performing regular push-ups, pull-ups, and sit ups in order to maintain muscle mass. He’s been known to perform upper body workouts in order to maintain strength and muscle.

Other exercises and workouts that Clooney has been known to partake in are hot yoga, running, basketball, and he even likes to dance. In a 2007 interview, Clooney admitted, “Well I do a lot of aerobics, a lot of dance, there is a lot of Jazz-ercise, the ab-master, there’s the butt-blaster or whatever it’s called. And there is a lot of yoga.”

As for Clooney’s diet, he sticks with lean proteins and healthy fats. He enjoys fruit juices along with veggie sandwiches, and as a snack he opts for nuts—a great source of healthy fats, by the way.

Although Clooney does enjoy the occasional drink, he is known to steer clear of tequila and vodka.

Clooney knows when to reward himself, and has been known to indulge in treats, but he knows not to go overboard. His biggest diet secret is eating in moderation, which is what has managed to keep him so fit.

Clooney previously embarked on a juice cleanse and only consumed salad in order to kick-start his healthy routine for the New Year.

As you can see, George Clooney lives a pretty healthy lifestyle. Maybe on his date night with Amal and friends he decided to treat himself a little and opted for dessert—we’ll never really know. Needless to say, he continues to look young for his age and maybe that has to do with marrying a younger, sexy woman. Regardless, the Clooney’s are one hot couple.