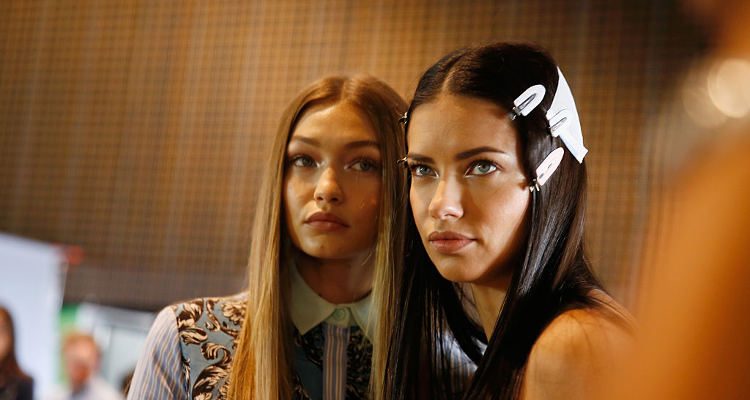 Gigi Hadid is honored to know and work with fellow model Adriana Lima. The 21-year-old Hadid has praised Lima, 35, for the help she has given her in the runway world after the pair were featured in the Victoria’s Secret Fashion Show 2016 in Paris, France, on Wednesday, Nov. 30.

After the show, Hadid uploaded a photo of her and Lima in their lingerie to Instagram. The photo included the caption: “Words can’t describe this woman’s powerful heart and spirit. She continues to lead the group with empowering confidence, grace, and infectious enthusiasm. I’m so honored and grateful to know and work with you (Adriana)! Thank you for your love and support.”

It is the second time Hadid has walked in the iconic show. She has also walked for designers, such as Chanel, Jean Paul Gaultier, Max Mara, Michael Kors, and Marc Jacobs. Adriana Lima has been a Victoria’s Secret Angel since 2000, and is the longest-running model at the show with 16 appearances under her belt.

Lima has also been a spokesmodel for Maybelline cosmetics from 2003 to 2010, and has also been in Kia Motors and Super Bowl commercials.

As models, Hadid and Lima must work hard with a healthy diet and regular workout routine. Let’s look at how Adriana Lima and Gigi Hadid prepare for the big fashion show.

Words can't describe this woman's powerful heart and spirit. She continues to lead the group with empowering confidence, grace, and infectious enthusiasm. ? I'm so honored and grateful to know and work with you @adrianalima!! Thank you for your love and support ❤️ #VSFS2016

Adriana Lima has always had a very healthy diet plan. For instance, she eats nothing fried, and consumes steamed meats like chicken. She also stays away from sugars, and also eats vegetables like spinach, broccoli, and other dark leafy greens. Sometimes Lima will indulge with hot chocolate, pizza, and croissants.

For breakfast, Lima may eat oatmeal with raisins and egg whites, and sometimes muesli with honey or yogurt. The supermodel’s portion controlled diet has her decrease her calorie intake as the day progresses. Other meals of the day will include chicken, fish, or red meat with vegetables. Snacks may include carrots and cucumbers, and a bit of chocolate and honey as well.

Gigi Hadid’s Healthy Lifestyle with Her Workout and Diet

Gigi Hadid also has an intense exercise routine of her own. Some even say that the American model has the best abs in the business. However, it turns that anyone can achieve a toned core similar to Hadid.

Hadid’s trainer Rob Piela says how much time you put into your training matters. Hadid also eats well and avoids sugar at all cost. A typical workout session for Hadid includes boxing and a total-body workout.

For those seeking a tight core like Hadid, Piela suggests an abs workout for four days weekly. It will include planks to benefit the deeper muscles, leg raises that target the lower abdominals, and crunches to help develop a visible six-pack.

Gigi Hadid and Adriana Lima certainly prove that it takes a lot of hard work to be a model. After all, you have a follow a healthy diet and regular exercise routine, and that is not easy for a lot of people.