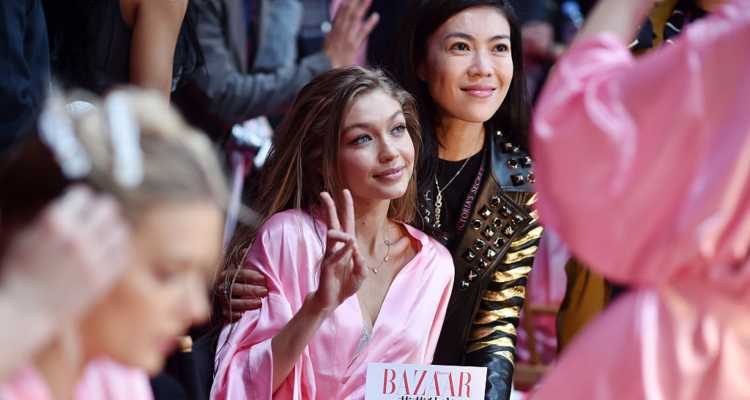 Gigi Hadid, Irina Shayk, and Adriana Lima all showed off their confidence while walking during the Victoria’s Secret Fashion Show 2016, even though there were a few wardrobe malfunctions. Victoria’s Secret Angel Hadid had some difficulties with her dominatrix-style lingerie, as a strap came undone. This little mishap didn’t faze Hadid though—the young model continued to strut her stuff will full confidence.

It also seems that the tiny outfits that Shayk and Lima wore gave the audience a full view of the ladies’ bums. But really, what did you expect to happen in a lingerie fashion show? There are going to be a few bum-slips here and there.

To train like an angel, Hadid is a big fan of boxing. In an interview with Vogue, the model explained, “Boxing has been great for me because it’s like my new sport, and it’s something that I can get better at. When you’re boxing, you get so into it mentally that you kinda forget what’s going on, you forget that you’re working out. You always want more.” Boxing is a great full-body workout, and a confidence booster to boot.

Hadid trains with pro-fighter Rob Piela, who has helped Hadid fuel her love for boxing. Along with boxing, she also completes bodyweight training and core-strengthening exercises.

Hadid has been active her entire life, so sticking with a workout plan isn’t that difficult. She grew up playing volleyball, along with riding horses, so she was fit even as a child.

Although Hadid enjoys pizza and cheeseburgers, the model typically adheres to a healthy diet. She has noted that living in New York has helped her eat healthy, as there are many great restaurant and food options that serve healthy food.

Lima may be a veteran VS Angel, but she still gets nervous. The five secrets to Lima’s incredible body are boxing, squats, core twists, obliques, and of course, stretching. These exercises help Lima maintain her flat tummy and killer arms and legs. For 35-years-old, Lima looks incredible—she does not look any older than the 20-year-old models she stands next to.

For Irina Shayk, working out and eating well is very important. Shayk won’t deprive herself when it comes to food, but she knows how to enjoy her favorite foods in moderation. Furthermore, she knows that whatever she eats, she can burn off during her workout.

For Shayk, working out provides her with a feel-good feeling, and she avoids lifting heavy weights as she does not want to appear muscular. Shayk’s secrets include boxing, Pilates, and staying well hydrated.

Now that filming of the Victoria’s Secret Fashion Show has wrapped up, the ladies can go back to their regular training schedules.

Oldfield, S., “Train like an Angel Victoria’s Secret model Adriana Lima reveals the five workout moves to get a body like her,” The Sun website, November 29, 2016; https://www.thesun.co.uk/living/2286392/victorias-secret-model-adriana-lima-workout-moves-body/, last accessed December 1, 2016.