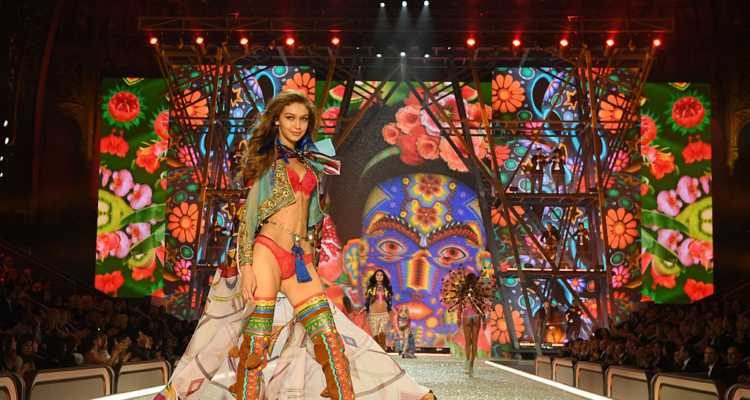 Gigi Hadid rocked it at this year’s Victoria’s Secret fashion show 2016 in Paris this week. The Victoria’s Secret Angel can now be a little more lax with her diet and workout routine after taking months to prepare for her moments on the runway.

Along with the other Angels at a few after parties, Hadid made sure to indulge in some long-awaited junk food that had been off limits to her over the past few months.

Hadid, 21, typically follows a clean diet to stay in shape and to keep those abs flat as can be. But after the Victoria’s Secret show, she headed to Ferdi in Paris, where she feasted on some comfort food that included burgers and macaroni and cheese. For the occasion, she wore a chain-mail-type bodysuit that was sheer and silver.

Her sister, Bella Hadid, and Kendall Jenner, who were also models in the show, joined her for the carb-loaded meal. Ferdi has a reputation for having the best cheeseburgers in Paris. When in Rome!

In the latest issue of Harper’s Bazaar, Hadid revealed that her diet is actually pretty typical and doesn’t include any crazy diets or tweaks. A typical day for her begins by getting up at 7 a.m. and eating a nutritious breakfast that includes eggs and another protein.

However, she’s been adding baked beans to her morning fare as of late, thanks to British boyfriend Zayn Malik, who introduced her to the concept of eating baked beans for breakfast.

She told the magazine ,“I usually eat breakfast or have coffee before I do anything. I live near the Smile, and I love their scrambled eggs, bacon, and toast. I drink orange juice and coffee always. My boyfriend, being British, got me into breakfast beans, so that’s what I’ve been eating lately.”

For lunch, the model eats whatever she wants, which can mean grabbing a burger from her favorite place JG Melon in the West Village in New York City.

“My personal motto is ‘Eat clean to stay fit, have a burger to stay sane,’ so if I’m in the mood I’ll go to JG Melon in the West Village,” she says. “Again, I love the Smile. They have a little arugula salad that I could eat every day.”

Her mid-day snack might consist of some coffee and ice cream if she’s craving something sweet.

Hadid believes her diet is low-key and not at all fussy. “If I’m going out, I like to go for dinner and drinks with friends. I love Bond Street for sushi,” she says. “For a night in, I love to cook and watch a movie.” She sounds about as down to earth as they come.

Fitness is a large part of keeping her body toned and in shape, and boxing is one activity she absolutely adores. It helps her forget what is going on around her and provides a phenomenal workout that really tightens and strengthens her core.