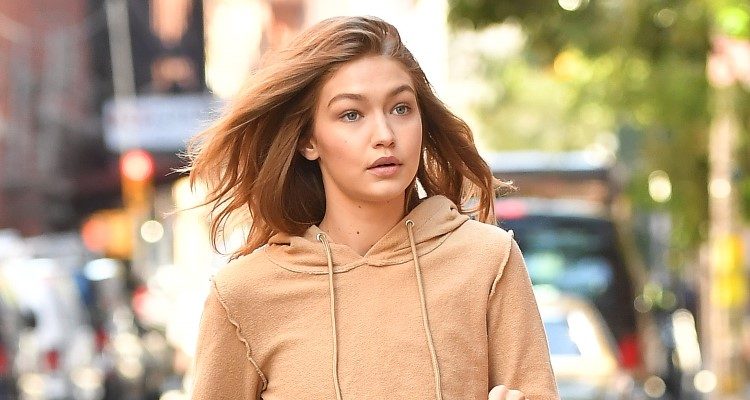 Gigi Hadid wears a crop top and jeans as she is seen in York City on July 26, 2016. Credit: Splash News.

Gigi Hadid’s amazing abs are enviable. The 21-year-old fashion model and television personality is often seen on the runway and out and about flaunting one of her best assets. So, what is Gigi Hadid’s abs workout? 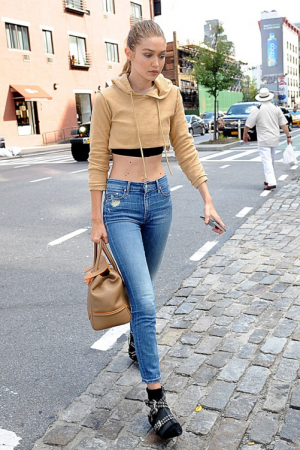 Gigi Hadid wears a crop top and jeans as she is seen in York City on July 26, 2016. Credit: Splash News.

Gigi Hadid’s trainer Rob Piela is the owner of Manhattan’s Gotham Gym and has worked with a plethora of celebrities, including Cara Delevingne, Kendall Jenner, Hugh Jackman and Bradley Cooper. He’s worked with Hadid for over two years, refining her gym workout.

A typical workout with Piela is dynamic and involves jumping rope, then cardio, calisthenics (gymnastic exercises) and a combination of boxing techniques, as well as some ballet-inspired floor exercises.

These four techniques are a big part of Gigi Hadid’s workout routine:

1.Boxing Workout: Gigi boxes for 30 minutes in 10 minute intervals as her warm-up. This raises her heartbeat before doing her ab exercises. Boxing involves many cross jabs that work her obliques. The cardio in the workout helps to burn fat and all the punching strengthens the core.

2.Crunches: Hadid does 40 crunches in three sets on a mat making a total of 120 crunches, which is something she can do anywhere as she is often travelling. She will box for an additional 10 minutes after her crunches.

3.Bicycle Crunches: Hadid does a second round of boxing with 80 (2 sets of 40) bicycle crunches. To do a bicycle crunch, lie on the floor in normal sit-up position. Place hands behind your head then sit up but twist your right elbow to your left knee. Kick your right leg straight and then switch sides. Hadid does her crunches with a kick on each crunch. When finished, she boxes for another 10 minutes

4.Planks: After the 10 minute boxing, Hadid performs a one-minute plank. This is a traditional arm-straight plank pose where you must keep your back straight and don’t stress your neck. After planks, Hadid does leg raises. Keeping her legs straight, she lifts them up towards the ceiling and then lowers them back down with control. She does four sets of 25 making it a total of 100.

Gigi Hadid is an all-around clean and sugar-free eater and makes the majority of her meals at home. She also enjoys various green juices. Her philosophy is to eat clean 90 percent of the time, and then have a cheat day. She also confesses her weakness is definitely a burger and fries, and she will allow herself to indulge on occasion to keep her sanity.

Hadid has never been one to focus on the look of her body. She grew up with a very athletic figure and was a devout volleyball player for 12 years – caring more about being the best at the sport versus how she looked while playing.

She also rode horses often – perhaps this is why she enjoys intense workouts like boxing and crunches to get her amazing abs? Hadid embraces her athletic body and doesn’t give in to the pressure to be too thin. She’s a hard worker in the gym, and that’s what gets her amazing results and a toned physique.