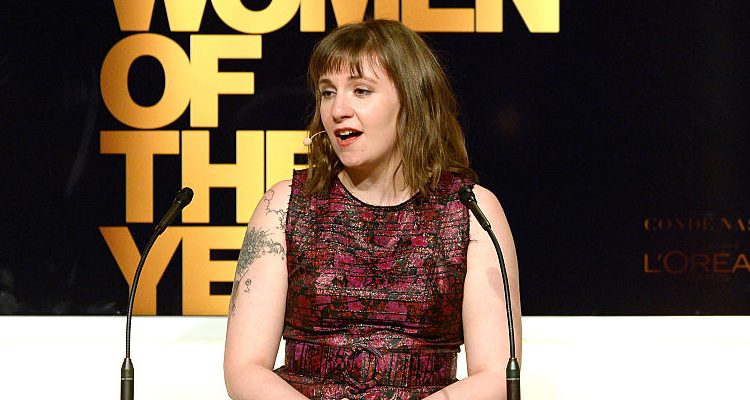 Lena Dunham, star and creator of the hit series Girls will be on the cover of the February issue of Glamour alongside co-stars and gal pals Allison Williams, Zosia Mamet, and Jemima Kirke, and she couldn’t be happier with the photo. Dunham is well-known for her constant body positivity, and she praised the magazine on her Instagram account for not retouching the photo to erase the cellulite on her thighs.

Mega proud to be sharing the cover of this all women-produced issue of @glamourmag with my sisters, interviewed by my wife @jennikonner. Photo by @emmasummerton. Clothing by Marc Jacobs. Sooo don't give a fuck looks by us. But we DO give a fuck. Such a big one ❤️

Dunham rocks a pair of Marc Jacobs pink satin short shorts and shows off her figure, proudly flaunting what some would label imperfections with a defiant stare. Want some of her amazing confidence? Check out Dunham’s workout routine below to help you get a healthy and happy body.

Dunham is a fan of the Tracy Anderson Method, which combines mat work with exercises designed to target accessory muscles. Other celebrity fans include Madonna and Gwyneth Paltrow, the latter of which has even invested in Anderson’s program and firmly states that it changed her life. Paltrow swears by this method and credits Anderson for getting her into great shape. Dunham shares this outlook, and she posted a photo to her Instagram account in April of 2015 thanking Anderson.

Promised myself I would not let exercise be the first thing to go by the wayside when I got busy with Girls Season 5 and here is why: it has helped with my anxiety in ways I never dreamed possible. To those struggling with anxiety, OCD, depression: I know it's mad annoying when people tell you to exercise, and it took me about 16 medicated years to listen. I'm glad I did. It ain't about the ass, it's about the brain. Thank you @tracyandersonmethod for showing me the light (and @bandierfit is where I bought my Florida mom inspired workout look.) #notsponsored #stillmedicated

In the post, Dunham also addresses the importance of working out for your mind as well as your body. The psychological benefits of exercise are well known and can include stress relief, lessening of anxiety and depression symptoms, as well as providing you with more energy. As the star aptly puts it, “it ain’t about the a–, it’s about the brain” [sic].

Along with following the Tracy Anderson method, Dunham also enjoys AcroYoga to help keep her active. A combination of acrobatics and yoga, AcroYoga requires participants to work in pairs or groups and improves balance and flexibility in a team-based environment. Many of the moves used also help to condition your core and arms as you work on stability and tone your body. While the exercises appear to be easy, they require a lot of concentration and determination in order to pull them off.

This intense focus on completing the moves correctly can also serve as a form of meditation, as you are meant to block out all distractions from your surroundings and daily life in order to fully engage in each separate movement. On top of that, there is the added incentive for you to perform the exercises to the best of your ability as you are often working cooperatively with another person, meaning that the quality of their moves can be hindered by yours if performed improperly. This built-in accountability works as a fantastic motivator to keep attending classes and work your hardest.

Lena Dunham has created an honest image of herself and is continuing her message of self-acceptance and body-positivity into the New Year. This month she will appear on the cover of Glamour, proudly showing off the curves she’s earned through healthy exercise and the cellulite she refuses to hide to conform to Hollywood beauty standards. Dunham is unapologetically transparent, and her fans love her for it.