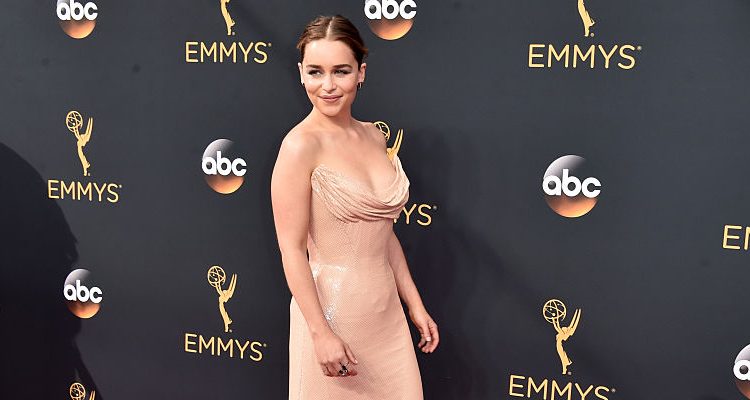 Emilia Clarke, best known for her role as the mother of dragons Daenerys Targaryen on HBO’s hit series Game of Thrones, is in incredible shape; so much so that it is rumored her fit body has caught the eye of co-star Kit Harington.

Clarke is clearly confident with her body and fitness level as the actress has had to appear nude in the series on multiple occasions, displaying herself in her most vulnerable state to viewers everywhere. While this can’t have been an easy task, her training for the 2015 film Terminator: Genisys is sure to have helped make these scenes a little easier.

For her role as Sarah Connor, the tough-as-nails heroine of Terminator: Genisys, Clarke had to go through quite a bit of rigorous training. On top of high-intensity cardio exercises like kickboxing, she also added weight lifting to her regimen in order to build strength and muscle. She revealed to Train magazine that her preparation for the role of Sarah Connor was, “the most physical thing [she’s] ever done.” It’s no wonder, given that on top of her regular workouts, Clarke also had to participate in a variety of weapons training so that she could convincingly shoot a gun (and rocket launcher!) for the film. Hand-to-hand combat training and stunt training was also required, as she performed many of the fight scenes and some stunts herself.

While her training alone was grueling, Clarke also used a strict diet to help get in fighting shape. She cut out all sugars and added more protein to her diet to help add muscle mass while cutting down fat. It was no easy feat, with the actress admitting to wanting nothing more than some chocolate cake and a beer after a long day of training and dieting.

Her everyday diet is much less daunting, with the focus on creating a healthy and balanced lifestyle. Clarke is a huge fan of the Clean and Lean diet, created by James Duigan. She posted a photo to her Instagram account of herself and Duigan with the book this past January.

Allow me to introduce the key to my very happy kitchen. This book. And this dude what wrote it… @jamesduigan your eyebrow makes my mornings. ?? #nomnomnomnomnomeverypage #fullofthingsthatmakeyouopoopandthingsthatmakeyougood @bodyism ?

The diet emphasizes the nutritional quality of raw foods, with meals meant to be centered on a balance of protein, fats, and lots of vegetables. The plan is well loved by fellow celebrities Hugh Grant, Rosie Huntington-Whiteley, and Elle MacPherson. The central focus of the Clean and Lean diet is to promote the intake of foods that have not been processed, or are as close to their natural state as possible. Duigan believes that eating fresh, unprocessed foods allows your body to rid itself fat causing toxins. He also suggests minimizing your sugar intake, adding that sugar (or glucose) should not be listed in the first three ingredients of any food product purchased. He also recommends steering clear of those that contain additives you haven’t heard of.

Whether or not the rumors are true, Kit Harington wouldn’t be the only one to notice the great shape his co-star Emilia Clarke is in, and her hard work and training have certainly paid off.