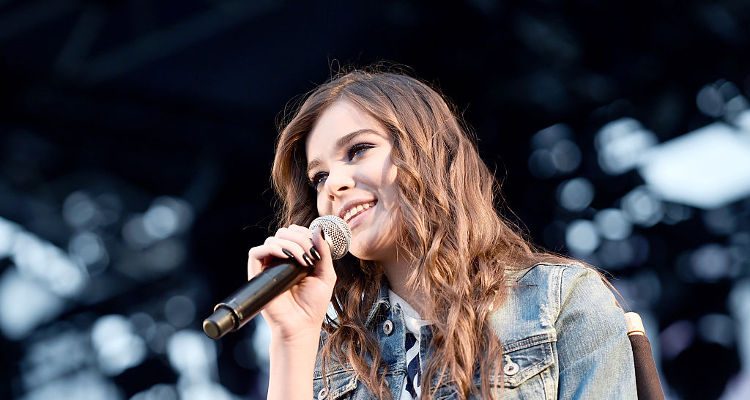 Hailee Steinfeld, The Edge of Seventeen actress Instagrammed her love for food! The picture shows a white brick wall that reads, “All I want is food and affection.”

After bagging a cluster of awards, the actress has received a Golden Globe Award nomination for Best Actress, Musical or Comedy, for the 2016 American comedy-drama film, The Edge Of Seventeen.

The film was released in theaters on November 18, 2016, by STX Entertainment and made a whooping $14.0 million. Hailee Steinfeld loves indulging in food, however, her thin figure definitely doesn’t show it. The American actress, singer, and model Instagrammed a snap where she looked truly gorgeous. She wore a black floor-length gown patterned with multi-color flowers which flaunted her toned arms and lean figure. She captioned it, “SO thankful a movie like #EdgeOf17 is being recognized.”

SO thankful a movie like #EdgeOf17 is being recognized.

She looked radiant in the pic as she posed for the Critics Choice Awards.

Hailee Steinfeld constantly keeps her fans updated with her treats! Looking at her toned physique, it is hard to believe that the starlet doesn’t stick to dieting. She doesn’t deprive herself of the things she wants to eat. She may either have a great metabolism or she might be genetically thin.

The actress has no desire to lose weight, nor does she follow fad diets as she already looks incredibly impressive and very comfortable in her own skin. Unlike other Hollywood stars, she isn’t obsessed with being skinny. It’s refreshing to see that a young star can be so confident and not succumb to the pressures of Hollywood.

Hailee Steinfeld has a huge sweet tooth and in this Instagram post, she shares a pic of some colorful macaroons which she states she has a constant craving for!

Althougth the starlet gives in to her cravings, she does monitor her food intake. She is mindful about her consumption and eats clean and nutritious foods most of the time. For Steinfeld, breakfast is the most important meal of the day and it usually consists of cereals. She will also sometimes have dark green vegetables, rice bran or whole-grain cereal, and drinks black tea.

Her regular cravings surprises her fans. “Craving for cereals,” she tweeted awhile back.

craving a bowl of cereal

While many other celebrities share only their indulgences, Steinfeld shares all her healthy habits to inspire her fans as well. “Learning to love fruit,” is another motivational tweet from several months back.

Hailee Steinfeld doesn’t even spend hours at the gym, but we speculate that all the dancing she does on stage and in her performances may be enough in itself to keep her in shape.

Her admirers and fans really love how real and inspiring she consistently is, and that makes her unique!