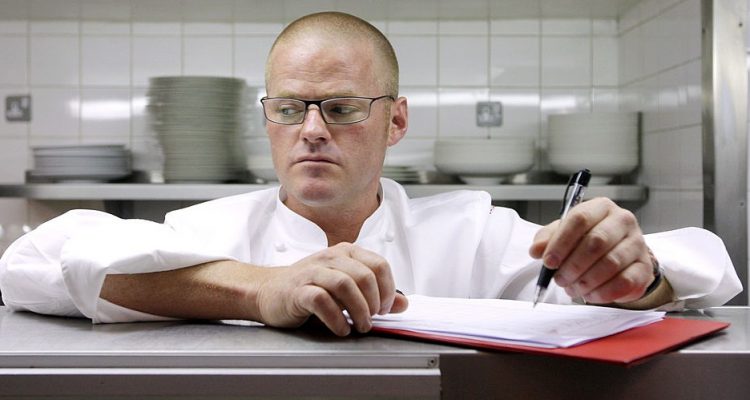 To win the MasterChef title, Elena Duggan and Matt Sinclair had to prepare Heston Blumenthal’s 91-step grand finale dessert, Verjus in Egg, in five-and-a-half-hours. Gary Mehigan described it as the toughest dish ever. Duggan beat Sinclair with two points on the MasterChef finale.

Heston Blumenthal’s pub in Bray, the Hinds Head, will be closed down late March for a transformation. It will replace the à la carte menu with three-, four-, and six-course menus that will change every month. They will continue serving dishes like the steamed oxtail and kidney pudding, quaking pudding, and running yolk scotch egg.

It will have an enlarged dining area with heavy tables and a lounge area with a bar. The wine collection will also be expanded.

For the braised oxtail and kidneys:

For the suet pastry:

Directions for the braised oxtail

Fry the leek, celery, and carrot in one pan, the star anise and onion in another, and the mushrooms in a third.
The vegetables should get caramelized. Face down the tomatoes in the pan and add little sugar. Caramelize them and deglaze with a splash of water.

Add all the ingredients together in a pressure cooker. The stock should be melted and mixed before putting the lid on. Cook the oxtail for one-and-a-half hours, and then leave it to cool naturally.

Trim the ox kidneys and remove any sinew. Put them in a pan of cold water and bring it to a boil. Place the kidneys in stock with thyme, peppercorns,and bay leaves. Simmer gently for two hours until tender.

Directions for the pastry

Mix the sifted flour, salt, and suet. Add water to make the dough come together. Rest for at least 20 minutes.

To assemble the pudding

Butter the mold three times, freezing after each application. Take 120 grams of the pastry for the molds and roll into a circle, about a quarter of an inch thick.

Roll and stamp out the lids at the same thickness with a pastry cutter. Heat up the pudding sauce until just melted. Put 90 grams of cooked oxtail and 25 grams of kidney into the molds.

Fill up with the sauce, just below the rim. Egg-wash the lip of pastry and fork down the lids. Cook for two hours at 100 °C steam. Let them rest overnight before eating.