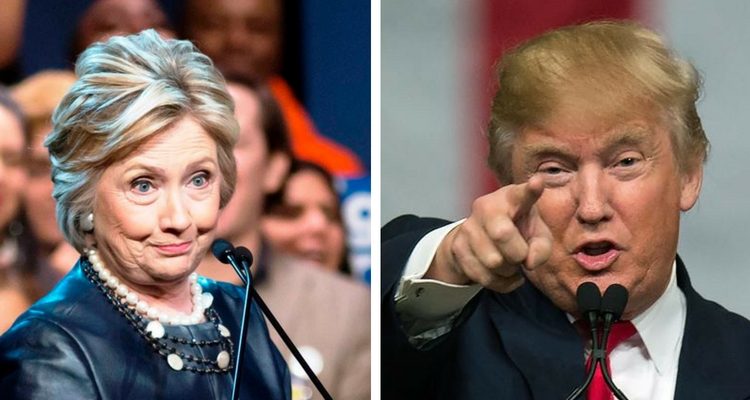 Instead of discussing the issues at hand, it seems all the buzz is surrounding these two candidates’ health. Are the candidates’ ages catching up to them as they give it all they got until Election Day?

Maybe the added stress of trying to be the next president is taking its toll.

Hillary Clinton was diagnosed with pneumonia days before the presidential candidate appeared to faint at a 9/11 memorial. Since that day, everyone has been talking about pneumonia along with her health in general.

After her incident at the memorial services, Clinton was taken to the hospital and later released where she spent time recovering at her daughter’s home.

Her campaign put out a statement Wednesday, giving us an update on Clinton’s medical information and confirming that she was diagnosed with non-contagious bacterial pneumonia.

It’s great to be back on the campaign trail. pic.twitter.com/vm1KX2uOXt

Clinton’s personal doctor, Lisa Bardack, wrote in a letter released to the media that she evaluated Clinton at least four times in the last month where she discovered the small right middle-lobe pneumonia. Dr. Bardack explained, “The remainder of her complete physical exam was normal and she is in excellent mental condition.”

Clinton’s health has long been discussed – a comparison of this latest health statement to the one released last year revealed that her triglyceride levels were up, but CNN’s Dr. Sanjay Gupta suggested it may have been a result of eating prior to the testing.

The current issues Clinton faces, as confirmed by her doctor, are allergies and hypothyroidism, but Bardack suggests that Clinton is in good health and no health issue is holding her back from campaigning.

Donald Trump recently visited the Dr. Oz Show to discuss his health. Trump stated he wished to lose 15 to 20 pounds as his current weight is somewhere between 236 to 267 pounds (the numbers varied based on the audience member interviewed).

During the interview with Dr. Mehmet Oz, Trump handed over a paper from his gastroenterologist for the doctor to read aloud. The letter painted a picture of overall good health, but much of the precise details of his health were left out.

Trump’s diet is admittedly ridden with fast food as he is constantly traveling, though he takes statins to lower cholesterol. He noted that he gets in his exercise with rounds of golf but said his presidential campaigning has held him back from the green.

Going by audience members’ statements after Wednesday’s taping, it seems as if Trump avoided any specifics when it came to his health, and instead aimed to paint a picture that all was OK and no one had anything to worry about.

Although Trump’s campaign did suggest that the results of his latest physical would be revealed, it seems that Trump has backed out and is continuing to keep those details private.

Does it really matter whether Trump releases his medical records? Does that necessarily make him a better or worse candidate? And for Clinton, has her recent illness put a damper on her overall campaign?

Regardless, it seems that Donald Trump and Hillary Clinton’s health is a hot topic that the media and public can’t get enough of. As long as Clinton is back on her feet and recovering well, that’s all that really matters.

And if Trump truly wants to drop that extra weight, it may be wise to drop the fast food and take up additional exercise aside from golf.