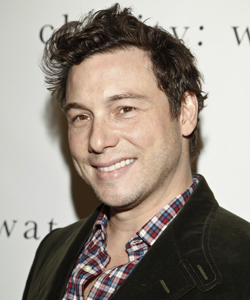 The chef said that he received a big wake-up call when his doctor told him he’d have to make some real changes to his celebrity diet or start taking a heavy dose of blood pressure and cholesterol drugs. So, instead of laminating about all the famous Rocco DiSpirito recipes that he could no longer make or eat, he decided to just transform the famous Rocco DiSpirito recipes into healthy ones instead.

“I started to make dishes that I love, healthy. The first dish was lobster bisque. In the summer I eat a lot of boiled lobster and I make lobster bisque with the leftovers and I realized that it actually tastes better when there’s less fat involved versus more fat,” DiSpirito explained at the 2013 Atlantic City Food and Wine Festival last weekend. “So then I tried fried chicken, mac and cheese, brownies, pizza—all the stuff that people love and want to eat every day—and little by little with a lot of tinkering and trial and error, I figured out how to make a lot of those dishes very healthy. And in many cases, the lighter versions taste better than the originals.”

While the recipes in his book Now Eat This! are all under 350 calories, Rocco DiSpirito is releasing another book based on his own celebrity diet, and his famous Rocco DiSpirito recipes called The Pound a Day Diet: Lose Up to 5 Pounds in 5 Days by Eating the Foods You Love. These Rocco DiSpirito recipes, he says, will allow people to lose 10 pounds a week on his 850-calorie-a-day diet—but whether that’s healthy or not is debatable.

This celebrity diet is not without controversy, and a very low-calorie diet, such as this one, is definitely difficult to do and may not be best for everyone. You want to make sure that even if you’re on a low-calorie diet, you’re still getting the nutrients you need.

Have you tried Rocco DiSpirito’s recipes, or is his low-calorie celebrity diet unrealistic for you?