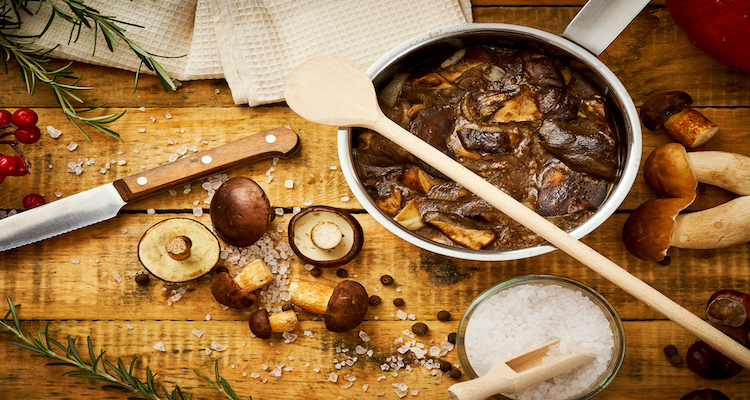 Gravy is a holiday staple and there’s no doubt it will be on your Thanksgiving table in 2019. People tend to put it on everything, sometimes without even fully knowing what it is. You might even think it is vegan. Gravy, after all, looks and tastes like a seasoned sauce. But if you’re vegan or vegetarian, gravy isn’t what it appears to be. So, whether you follow a plant-based diet or will be hosting Thanksgiving for someone who is, you’ll want to know how to make vegan gravy.

The popular holiday sauce, in its traditional form, is a brown (sometimes white), savory mixture of fat juice and drippings from roasting meats that is thickened with flour, seasoned, and stirred to make meat nice and moist. Clearly, not vegan.

Fortunately, gravy isn’t exclusive to meat eaters. There are a number of ways to make gravy in a vegan-friendly way to add complementary flavors to your meal.

The beautiful thing about vegan gravy is that it can be incredibly diverse. There are plenty of base flavors that can be seasoned just like traditional gravy, or provide something totally new. Some popular vegan gravy items include: mushrooms, black beans, onions, and miso.

Nutritional yeast is typically included not only to boost the overall nutrition of the sauce, but also to provide a savory flavor and a thicker consistency. Although it doesn’t sound like the most appealing ingredient, it’s definitely a great additive to vegan gravy—and if you’re vegan, surely you’ve got it on hand.

Rich in protein, vitamins, minerals, antioxidants and flavor, nutritional yeast is grown specifically to be used as a food product. It is a vegan source of complete protein and B vitamins, which gives it a little extra added benefit.

Another popular ingredient in vegan gravy is the mushroom. Mushrooms can add a bit of a “meaty” flavor or consistency if you want, and the degree will be based on the mushrooms you pick. Of course, if you hate mushrooms, you don’t need to add them at all!

Many of the seasonings in vegan gravy are the same as meat-based gravy. You may need to use vegan margarine if you want to recreate a bit of the fat, so feel free to play with it. And, like meat-based gravy, it can be rather difficult to cook.

In order to get the desired consistency and keep it free of lumps, you’ll have to pay attention with regular stirring.

salt and pepper to taste