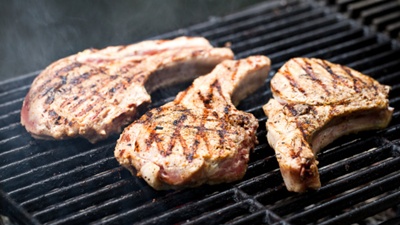 As soon as the warm weather lands, I start thinking about barbecuing. For some women, the sunny season is all bathing suits and sit-ups, but for me, it’s meat on the grill! Steak lightly charred, ribs dripping with sauce, marinated chicken breasts perfectly juicy inside. As a recovering vegetarian, I can talk freely about my newfound love of meat. Because in patio season, friends, it’s great to be a carnivore.

But everything absolutely delicious in moderation, please!

The problem with barbecuing is that it’s carcinogenic, which does put a damper on a back-deck cookout. Whether you’re grilling healthy fish kebabs or a porterhouse, the blackened areas contain nasty chemicals that can damage DNA and lead to cancer.

The longer flesh foods—fish, meat, and poultry—are cooked, the more dangerous they become. And unlike plant proteins and fruits and vegetables (also tasty on the grill!), these proteins have amino acids and creatine that pose certain risks under extreme heat.

Cancer on Your Grill

When the flesh starts to brown and blacken, heterocyclic amines (HCAs) and polycyclic aromatic hydrocarbons (PAHs)—both potential carcinogens—form. Barbecuing isn’t the only cooking method that puts your DNA at risk; high-temperature frying and searing also produce these dangerous chemicals.

So, for a little good food news for those passionate about barbecuing, let’s turn to a new report from the Journal of Agricultural and Food Chemistry that found marinating meat in beer cuts down the number of potentially cancer-causing compounds that form when you fire up the charcoal for pork, specifically. I’d take a G&T over beer most days, but there’s a lot to be said for a quality brew.

Food science must involve a lot of chow time, so the job has its high points! The researchers marinated the pork chops for four hours in either regular or nonalcoholic pilsner or dark ale. Next, they put the chops on a charcoal grill. Sounds good so far! After cooking, the chops were analyzed for PAHs.

The results could have you buying more beer: Dark ale cut PAH levels in half, compared to the meat that wasn’t marinated. Dark beers tend to have the most antioxidants, the compounds that help fight free radical damage.

The researchers suggest that because PAHs form with the help of free radicals, the dark ale’s antioxidants could slow down that process. The regular pilsner cut PAH levels by 13%, while the nonalcoholic pilsner came in 25% healthier. So fire up the grill and have a toast!

While there’s no word on steak, I could get used to a succulent chop.