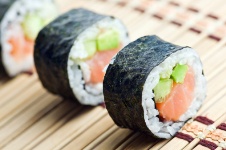 Sushi is a popular Japanese dish that has become a favorite at restaurants over the past couple of years. But is sushi healthy? Here’s what I think.

Sushi is mainly made-up of rice and either fish or seafood. The rice is short-grain Japanese white rice mixed with vinegar, sugar, and salt. Some types of sushi are wrapped in nori, which is a green algae plant pressed and rolled into thin sheets, also known as “edible seaweed.”

Neta are the fish ingredients within the sushi: the most commonly used fish are tuna, salmon, mackerel, and snapper. Other types of neta are also used, such as squid, shrimp, clams, eel, and octopus. To give sushi a better taste, many people add several types of toppings, such as avocado, cucumber, radish, soy beans, asparagus, and pickled vegetables.

From a nutritional perspective, I consider sushi to be a very good meal choice. First of all, sushi is low in saturated fat and calories, but higher in protein, carbohydrates, and various nutrients from the nori, vegetables, ginger, and wasabi. Sushi contains a healthy source of fat, with the majority derived from the omega-3 family attributed to the use of fish and seafood neta.

The amount of calories, proteins, and fat in sushi depends on the type. A typical California roll, for example, has 255 calories, seven grams of fat, nine grams of protein, 38 grams of carbohydrates, and six grams of fiber.

A premade, takeout tray of various types of sushi containing 10 pieces has 495 calories, 12 grams of fat, 62 grams of carbohydrates, and 35 grams of protein.

The only problem I have with sushi is the amount of carbohydrates derived from the white rice that sushi contains. If you are concerned about the amount of white rice you eat, I would recommend that you consume sushi in smaller amounts or try types that contain less rice; some restaurants make brown rice sushi, so that is definitely something you should try.

On the bright side, health risks associated with sushi are uncommon: all fish that are used to make sushi must be frozen before being served, so the risk of contamination is not an issue. Tuna can contain mercury, so if you are pregnant or nursing, you can avoid the tuna neta and choose a different variety instead.