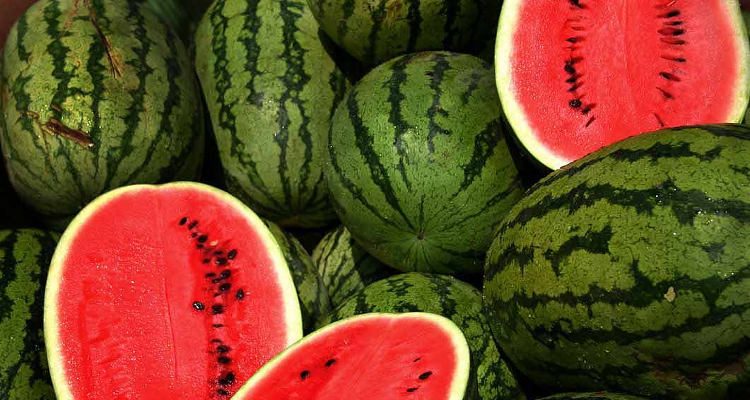 According to the American Diabetes Association, 25.8 million Americans currently have diabetes, and by 2020, almost half of all Americans will have this disease. Diabetes is a condition when the body is unable to utilize the sugar absorbed from the food.

The main restriction for diabetics is controlling their sugar intake. However, they can eat carbs and fruits that have a low glycemic index, as long as they watch the amount of carbs they consume and exercise daily. As a diabetic, you can consult your doctor (or a dietician) to chalk out a plan where you can enjoy your favorite foods and seasonal fruits, such as mangoes and watermelons.

Is Watermelon Good for Diabetes? 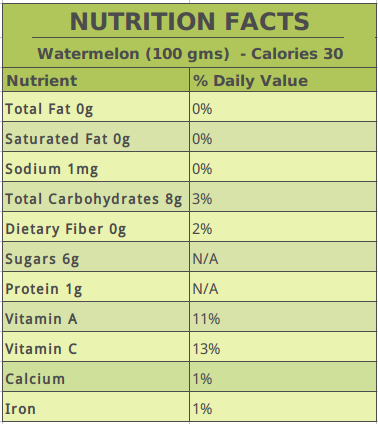 The amount of sugar in watermelon is not too high. A serving of 100 grams of watermelon contains six grams of sugar and only 30 calories. It has good amounts of vitamin A and vitamin C, around 11% and 13% respectively.

It also has folate, choline, potassium, magnesium, zinc, and copper. Watermelon has more than 90% water, and the fruit is a great option to keep yourself hydrated, rather than drinking sugar-laden soft drinks.

Watermelon contains good amounts of lycopene, which gives the fruit its red color. Lycopene is a naturally-occurring carotenoid pigment and phytochemical.

It is a strong antioxidant that may help reduce the risk of cardiovascular disease. In addition, it may be useful in preventing various types of cancers, asthma, and cataracts—although more research is required in these areas.

Watermelons also have phytosterols. A 100-gram serving of watermelon contains 2 milligrams of phytosterols. These are basically plant sterols which structurally resemble cholesterol.

Although we consume them through various foods, they are not absorbed much in the blood. These are useful as they are said to hinder the absorption of cholesterol in our blood. Some studies show that eating foods with phytosterols help reduce serum LDL levels.

Foods that have a low or medium GI are less likely to raise blood sugar levels. A GI over 70 is high, and 55 or less is low. The GI of watermelon is 72. Although watermelon has a high GI, the carbohydrate content in a single serving is low, and there is some amount of dietary fiber.

Glycemic load is a number that estimates how likely certain foods will increase blood glucose levels. It is calculated by multiplying the GI by the grams of carbohydrate in the food, and dividing that number by 100.

A single serving of food which has a GL greater than 20 is considered high, and those with a GL less than 10 is low.

The carbohydrate content in 100 grams of water melon is eight grams. Therefore, the GL of watermelon is 5.76 (8 X 72 ÷ 100), which amounts to a low GL. Since it has a low glycemic load, consuming watermelon in moderation doesn’t significantly increase blood glucose levels.

So, is watermelon good for diabetics? Yes, diabetics can reap the benefits of the essential vitamins and minerals contained in watermelons, but moderation is key. Eating limited portions, along with other low-GI foods, may, in fact, be beneficial for diabetics.

Health Benefits of Watermelon for Diabetes

Now you know, watermelon has ample nutrients and benefits diabetics in many ways. Here are some of the health benefits of watermelon.

Watermelon is low in calories and has a high water content. It can be consumed as a snack, or as juice without packing a lot of calories into your body.

Diabetics complain of feeling half full after a meal. Eating watermelon makes you feel full since it has a high water content. This will prevent cravings and help maintain a healthy weight, which is an essential factor for diabetics.

An increase in blood sugar levels in diabetics may lead to various eye disorders or even blindness. It is a major cause of blindness among people aged between 20 to 74.

Watermelon has 11% of vitamin A. This vitamin helps in maintaining the eye health. The vitamin C in watermelon is also useful for eyes.

Diabetic people are prone to kidney disorders. Watermelon can stimulate kidney function, and reduce inflammation of the kidneys. The study published in Physiologia Plantarum also states that a high potassium intake prevents the development of diabetes that occurs with prolonged treatment with thiazide diuretics.

The fruit acts as a natural diuretic, and helps in decreasing uric acid in the blood. The high water content in watermelon induces frequent urination, and helps the kidneys flush out toxins from the body.

A diabetic person is susceptible to infections. Watermelon has good amounts of vitamin C and antioxidants that help fight against infections and boost immunity. Thus, consuming watermelon may reduce the risk of infections in diabetics.

Diabetics often suffer from fatigue. As the blood glucose level increases, it interrupts with blood circulation, depriving the cells of adequate oxygen. Even if the sugar level drops to a certain extent, a diabetic person may feel tired.

Other Fruits Diabetics Can Eat

Watermelon is not the only fruit that is good for diabetes if eaten in moderation. Here are some more fruits for diabetes that aren’t loaded with large quantities of sugar.

Be sure to eat the whole fresh fruit, as juices or canned fruits may have added sugars which can be harmful for diabetes. Like watermelon, even these fruits should be eaten in moderation to prevent a blood sugar spike.

Among all the fruits, cherries have the lowest glycemic index with a GI of 22. Cherries also contain antioxidants, vitamins A, C, and K, as well as potassium, iron, magnesium, fiber, and folate. The antioxidants in cherries may help protect from heart diseases and cancer.

Apples are rich in soluble fiber, vitamin C, and antioxidants. They also have omega fatty acids, pectin, and dietary fiber, which helps detoxify the body by removing harmful wastes. It may also prevent heart attacks and reduce the risk of cancer.

Guava contains twice the recommended daily intake of vitamin C. It also has fiber, potassium, and folate. People who are at a risk of diabetes should drink guava leaf tea regularly. It is made by crushing dry guava leaves, and boiling a tablespoon of these in hot water.

The glycemic index of grapefruit is 25. The American Diabetes Association recommends grapefruit as one of the superfoods for diabetes. Grapefruits have good amounts of vitamin C and soluble fiber.

A flavonoid present in grapefruit called naringenin, increases the body’s sensitivity to insulin, and also helps to maintain a healthy weight.

Grapefruit is also said to prevent heart disease. However, you should be careful if you are on cardiac medication, as grapefruit may interfere with them.

Sweet and juicy, peaches are diabetic-friendly. They have potassium, fiber, and vitamins A and C. You can have it as a snack, or add it to smoothies or ice tea.

Avocados are rich in monosaturated fatty acids and fiber, both of which help to maintain steady blood sugar levels.

Diabetics have a higher chance of heart disease and stroke, and according to the Academy of Nutrition and Dietetics, monosaturated fats are good for heart health.

Most berries have a low glycemic index. According to the American Diabetes Association, berries such as strawberries and blueberries are good for diabetes, as they contain antioxidants, vitamins, and fiber. They are low in calories, and have good amounts of carbohydrates and fiber.

This juicy and sweet fruit has good amounts of dietary fiber, vitamins C and K, and potassium which help to regulate blood sugar levels, improve digestive health, and balance cholesterol. Pears help improve insulin sensitivity, so they are good for people with type 2 diabetes.

These refreshing and tangy fruits are rich in vitamin C and dietary fiber. Other vitamins and minerals in oranges include potassium, magnesium, calcium, phosphorous, folate, and choline. It has more than 170 phytochemicals and over 60 flavonoids.

In conclusion, watermelon is beneficial for diabetics when consumed in moderation. Diabetics can also eat watermelon (or other low-GI and GL fruits) when they are craving sweets, so that they don’t end up indulging on sugary foods. Furthermore, diabetics should also have a balanced diet, exercise regularly, and ensure proper sleep to keep their blood sugar levels in control.