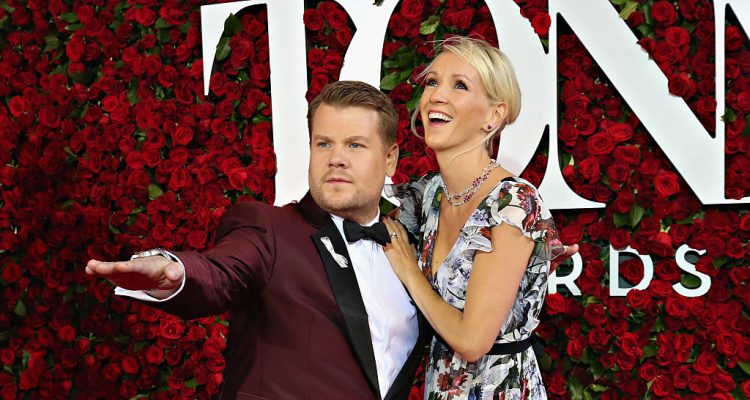 James Corden and his wife Julia Carey are so much in love that they even go to the gym together. Corden’s fun-filled mischief on The Late Late Show has made him rise to prominence. Although he is immensely occupied with the show, he does try to keep his fitness level high and heads to the gym frequently.

Corden has been spotted with his stunning wife after a healthy gym session. He was sporting a grey Adidas hoodie, which he paired with rolled-up sweat pants and a pair of trainers. Carey was seen wearing a skintight pair of sports leggings that embraced her toned legs, and a form-fitting sports top that revealed her sculpted figure.

It is not the first time that the couple has been seen together at the gym. They have made joint workouts a regular thing during their time in Los Angeles.

James Corden’s weight was a major obstacle in his career. He has dealt with weight fluctuations since his 20’s, especially when he got his big break on the hit BBC show Gavin and Stacey from 2007 to 2010.

It was always quite the obstacle for Corden when it came to securing the on-screen roles he really wanted. When Corden starred in the TV drama Fat Friends from 2000 to 2005, he weighed in at over 300 pounds. Corden has managed to lose a whopping 85 pounds, and now weighs in at 210 pounds.

He found success with The Late Late Show and with his hugely popular “Carpool Karaoke,” where he sings alongside the best in the business like Adele, the Red Hot Chili Peppers, and Selena Gomez.

The father-of-two says his priorities have changed after the arrival of his children. He did not want to be so out of shape that he couldn’t run around with them.

Corden is practicing a healthy lifestyle by hitting the gym and eating a balanced diet.

He specifically told The Daily Mirror, “I’ve cut out sugar and bread, and eat only at mealtimes now. I didn’t realize before that it wasn’t okay to constantly graze all day, that this wasn’t a thing and that it was frowned upon.” He has also hired a personal trainer. He further said “I also have a trainer who comes round to my house three mornings a week.”

All what we could make out from his pics is that his beloved wife is acting as his source of inspiration and helping him accomplish his fitness goals.