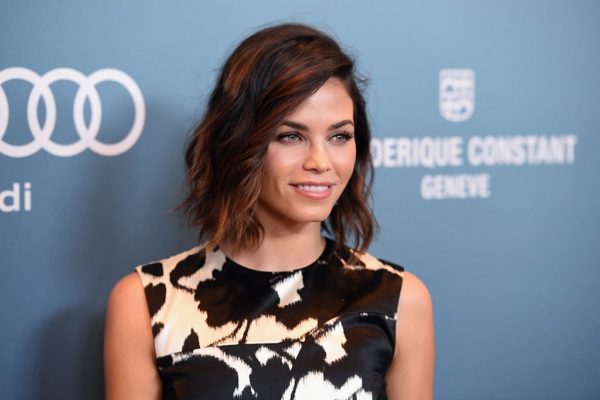 Jenna Dewan Tatum Instagrammed a Halloween pic where she was dressed in a white unicorn costume with sparkling silver hair. Channing Tatum’s wife looked glamorous in the glittering costume. While we know the star doesn’t rely on a professional for her makeup, we must say she did a great job on her costume.

Tatum has been a vegan since she was 10. She swears by vegan food which has blessed her with a chiseled figure. Her breakfast is a green smoothie, which gives her great skin and hair and fills her up with energy. It is a healthy combination of spinach, kale, lemon, apple, banana, sometimes pear, a little cod liver oil, and black sesame seeds blended with water.

She loves to eat Lebanese food, and tabouli is her favorite. It is a salad made up of tomatoes, finely chopped parsley, mint, bulgur, and onion, and is seasoned with olive oil, lemon juice, and salt. When hunger strikes, she makes and stores healthy munchies that she can grab anytime. Her dinner includes brown rice bowls with black beans. She also has roasted veggies like carrots, purple potatoes, butternut squash, asparagus, and zucchini dressed with tahini sauce or olive oil, salt, and pepper.

She did try to turn hubby Channing Tatum into a vegan as well. During an interview with Women’s Health, she says, “He really did try to be vegan for six months,” she says. “The guy doesn’t like vegetables, which makes it tough. It was hard in the beginning because you want someone to be on the same page, but you’ve got to let people be themselves.”

She prefers someone to watch over and inspire her like a trainer, or being a part of a class while she is working out. She says working out is good for the mind, body, and soul. Her workouts include a combination of hiking with her dogs, spin classes, and hot yoga. She needs to enjoy her workout routine otherwise she will makes excuses to not do it.

She loves working with Jennifer Johnson. She either follows Johnson’s choreography or dances in a squatting position. For the first 15 minutes of the class, they do nonstop dance cardio to three or four hip-hop tracks. Then she does muscle-toning moves which include bands with five-pound weights on the ankles, followed by squats and lunges on a box. Tatum also does gliding disc core workouts, which works on the muscles in her stomach.

Her vegan diet and dedication to a workout routine has surely helped her to be in the best shape possible.

Baer, D., “How I Eat And Workout In A Day, By Jenna Dewan Tatum,” Women’s Health web site, September 12, 2016; http://www.womenshealthmag.co.uk/fitness/celebrity-body/5641/how-i-eat-and-workout-in-a-day-by-jenna-dewan-tatum/