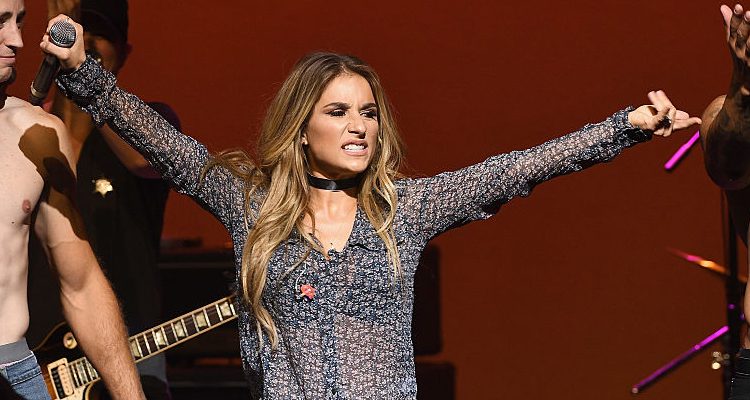 Country singer and reality TV star Jessie James Decker posted a body positive photo to her Instagram last week of her showing off her “loose mommy skin” in a cute, pale pink bikini from her Kittenish collection.

This isn’t the first time the singer has shared a  look into the ways her body has changed since becoming a mother, and she consistently encourages her followers to remain confident and body positive despite having gained pregnancy weight and/or experiencing loose skin after having children. She posted a photo to her profile just days after the birth of her second child, Eric Thomas Decker II, proudly displaying her baby weight and even her C-section scar.

I appreciate all of the sweet comments about how tiny I look after baby! But I don't want to mislead any mommy's who just had babies and are stressing! I gained 55 pounds with my daughter and only 27 this time! I gained so much with her because I threw up every day for five months and of course was starving after so I would shove anything in my mouth to make that hunger feeling go away. This time I ate very normal and would take occasional walks. I am still 15 pounds away from what I was originally before I got pregnant with Vivianne. I take occasional walks but haven't done anything yet to try and lose weight and am in no rush! Nursing mamas should def not try and do any severe diets or milk supply will run low! My tummy is still swollen and you can see my c-section scar and pooch! I had another due to my 9lb baby and petite frame. So no rushing and no stressing about losing weight! Wanted to make sure y'all saw what my tummy looks like under the tank top and blazer…I do wear a belly waist train thingy a few hours here n there which helps c section mamas and swelling to go down. I am so glad we all can support each other. Being a mommy is so rewarding but hard work so we need to stick together and help each other out. I'm not perfect but I do my best. That's what it's all about. So never be hard on yourself. I'm going to try and do more posts like this. So feel free to ask anything below and will try and incorporate it in another mommy post! ❤️y'all

Decker looks fantastic in both photos and the captions stress that she was in no hurry to drop the extra pounds fast, as strict dieting isn’t recommended for new mothers and those who are still breastfeeding. When she was ready, though, the mother of two tackled her weight loss with a healthy approach.

Healthy eating and a protein diet were Decker’s go-to methods for shedding the extra weight gained during her pregnancies. A typical breakfast for the mother of two would consist of two breakfast burritos packed with protein-filled eggs and turkey bacon, a sprinkle of cheese and a dash of hot sauce, all wrapped up tight in a mini corn tortilla. She got her daily dose of caffeine and enjoyed a cup of coffee with breakfast sweetened with cane sugar and creamer. A mid-morning snack of a vanilla protein shake made with cashew milk satisfied any sweet cravings while keeping her full and her metabolism going. Decker’s average lunch consisted of a 4-ounce grilled chicken breast over a salad made up of spinach, strawberries, and feta cheese. She made her own salad dressing out of olive oil, honey, white wine vinegar, salt, and pepper – a great trick for cutting back on the sugars and unwanted fats that can be found in store bought dressings. After a daily workout, Decker would sip on a chocolate protein shake made with cashew milk to help her muscles recover after exercising and refuel. Finally, a typical dinner for the singer would consist of a 4-ounce grilled flank steak with oven roasted potatoes and cauliflower and seasoned with olive oil, salt, pepper and garlic powder. She even enjoyed dessert, treating herself to homemade chocolate chip cookies.

Decker also sipped on lemon water throughout the day to ensure she remained hydrated. She kept track of how much water she was consuming by using a 32-ounce plastic Mason jar mug and counting how many times she filled it throughout the day. An average day had her drinking four or five mugs full of water, translating to anywhere between 128 ounces and 160 ounces daily – or between 16 and 20 cups.

Jessie James Decker’s body positive posts set a great example for those trying to lose baby weight. She is happy and confident in her new skin, and rather than rushing to drop the baby weight due to societal pressures, she went about it in a healthy way once she was ready and used exercise, a healthy diet, and plenty of water to trim down.