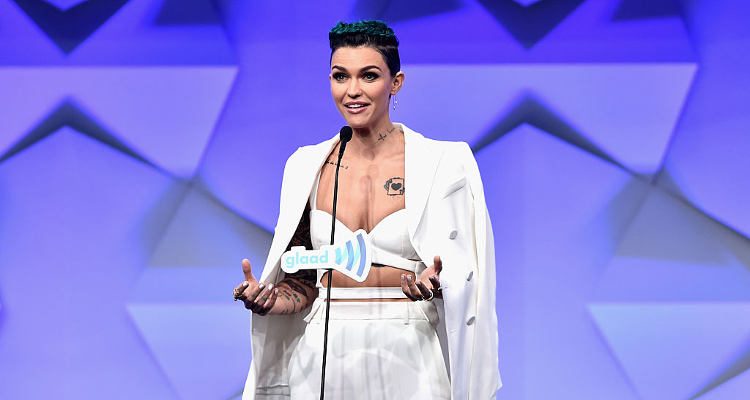 John Wick 2 star Ruby Rose recently worked out with songstress Ellie Goulding in an attempt to become “Instagram fitness models.” The DJ/actress posted a video of the two in the gym, where Rose offered Goulding some support as she completed chin-ups.

Rose is currently in Auckland, New Zealand, to film the movie Meg alongside Jason Statham, so you know it’s going to be action-packed if she’s already training – although she’s always been known to be fit with killer abs.

In another post, Rose revealed some of her training techniques for the movie Meg, where she is seen jumping over a handrail – onto a mat of course! – performing some fight scene moves, and even jumping into a pool.

So what other healthy habits does Rose have, you may ask? Read on to find out.

@elliegoulding and I trying to be Instagram fitness models ????

Rose has made hitting the gym a part of her regular everyday routine. This allows her to fully prepare herself for the day ahead. She manages to get in four to five gym sessions a week, which include cardio, weights, and even sports like soccer. Although the majority of the time Rose works out on her own, she does work with a personal trainer at times.

Rose is a former boxer, but even she has days where getting to the gym is a struggle – who doesn’t? To keep herself motivated, she often refers to old pictures of herself from when she was a boxer with a ripped six-pack and chiseled arms. She also stays motivated because she knows the great feeling she gets when she starts her day exercising; therefore, she makes sure it’s part of her morning routine.

As for her diet plan, Rose has a very strict policy against dieting. She is open to trying different health secrets, but dieting is not one of them. She likes to stick with everything in moderation, and if she overdoes it one day, she will just go a bit harder in the gym to compensate.

Rose is a vegetarian and reports that summertime eating is more difficult for her because she enjoys soups and curries, which aren’t very summertime-y foods. She has previously tried a vegan 30-day detox, which she noted helped her reduce her alcohol and caffeine intake.

Although Rose lives a pretty healthy lifestyle, she still likes to indulge every now and then. Her weakness is chocolate, but the problem is that she’s allergic to refined sugars; so she has to be careful. She also really enjoys green and peppermint tea and refuses to eat red meat, as she has a strong love for animals.

As you can see, the versatile Ruby Rose lives a pretty healthy lifestyle – from rigorous workout routines to a healthy diet plan. It’s no surprise that she looks as amazing as she does.