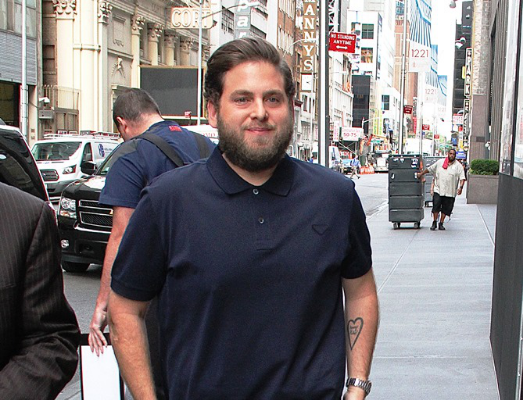 Jonah Hill and Andrew Garfield are sure to be elated after they both received nominations for the 2017 Golden Globe Awards. The War Dogs star and Garfield celebrated their nominations over lunch by dining at Alcove Cafe and Bakery in Los Feliz, Los Angeles. Their faces brightened up with their extending smiles.

Playing a repellent arms dealer in War Dogs is like a dream come true for Jonah Hill. Although Jonah Hill’s increasing weight gain was not a big obstacle in his career, he wanted to take up some challenging roles. He has made people laugh with his chubby, lovable character in Knocked Up, Forgetting Sarah Marshall, Funny People, Superbad, Accepted, and Get Him to the Greek. His desire to come out of the comfort zone and take up some serious acting roles wasn’t easy with his existing frame.

Jonah Hill is widely known for his fluctuations in weight. His weight loss journey started back in 2011, when he lost 40 pounds, but gained it all back in a year. He loses weight while filming for movies and then quickly gains it back. Currently, Hill is in the best shape of his life and his fans surely want to know his weight loss secrets.

With the escalating weight, he figured out the flaws in his eating habits. To incorporate healthy habits in his daily routine and to help guide him about proper nutrition, he hired a nutritionist. He now includes fruits, veggies, lean protein, whole grains, and low-fat dairy products in his diet.

He followed an exclusive plan and ate a lot of sushi and ruled out alcohol from his diet. He loves to drink beer and confessed that if he doesn’t drink beer, he gets really thin; when he does, he gets a little bigger. To keep his cravings at bay, he took proper counseling from experts. Hill shed the extra pounds and has since continued to eat healthy. It is vital to have a proper mindset in order to see good results. Cravings for junk is not out of the ordinary for anyone, and keeping away from junk was excruciating for Hill, too.

Eating healthy will aid in weight loss, but relying on dieting alone may not give you astonishing results. It must be accompanied with workouts. He had little knowledge of the workouts which would suit him best and was unsure as to which ones would give optimum results. To have an effective workout routine, he trained with a fitness trainer.

Exercises were never a part of Jonah Hill’s routine and so he had to start with light exercises like running, sit-ups, and push-ups. Gradually he moved on to dexterous exercises which made him sweat more. Eventually, his body got used to the routine and without a hitch, he could complete 100 push-ups!

His dedication to workouts boosted his metabolism and gave him such immense stamina, that he would hardly get exhausted.

Now that Jonah Hill has trimmed down and looks stunning, we hope to see him in more serious roles in the near future.