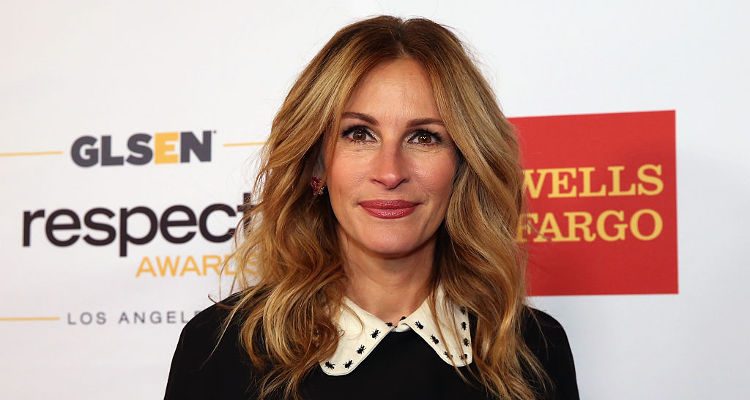 Pretty Woman star Julia Roberts has always looked fabulous and in shape, from her first role in Mystic Pizza to today. The actress has a long, lean physique that she keeps trim and fit by following a healthy food plan and by doing regular exercise, especially running.

The mom of three can take her look from glamorous chic to casual soccer mom within twelve hours, which is exactly what she did this past weekend.

Friday night, Julia Roberts, 48, was dressed for a cause at the GLSEN Respect Awards where she looked radiant in a floral embroidered Gucci cape dress with a Peter Pan collar. The look was sophisticated but subtly playful. The next day, Roberts gave up her done up look and opted for a pair of jean shorts and a collared, button-up shirt that she wore to her kids’ soccer game in Los Angeles.

The star has a bit more time these days for mom duties and quality time with her children because the only project she currently has on the go just wrapped up production. The new film is a dram called Wonder about a boy with a facial deformity who tries to fit in at school.

Roberts refuses to follow a strict diet and workout plan because it would quite simply drive her crazy, she says. Her secret? Do everything in moderation. She says, “I feel like if I knew all the things to do (in terms of exercise), I would probably look like I was put together with tape.”

For her, she finds it far more reasonable to remain calm, drink water, get sleep, and be joyful. Lovely advice, really, and she applies that same logic to family meals as well. For the most part, she stays away from junk food and eats lots of fresh foods, including fruits and vegetables, but that doesn’t mean you won’t find her indulging in ice cream once in a while—again, everything in moderation.

“We definitely try to eat mindfully,” she says of her family. You have to eat the good stuff to get the good stuff is something she frequently says to her three kids. And the good stuff for this actress came in 2015 when she was offered a spring/summer modeling gig with Givenchy.

Her workout routine, much like her diet, is based on principles of simplicity and, yes, moderation. She focuses on exercises, such as cycling, swimming, and running. Exercise is part of her weekly routine, and she knows that it is necessary for good health and longevity.

When she does decide to do a proper aerobic workout in a gym, whether at home or at a commercial gym, the actress will do a routine for 20 to 40 minutes and will do exercises that will give her a total body workout. She does push-ups, planks, squats, lunges, and ab crunches in between whatever aerobic activity she chooses for that day.