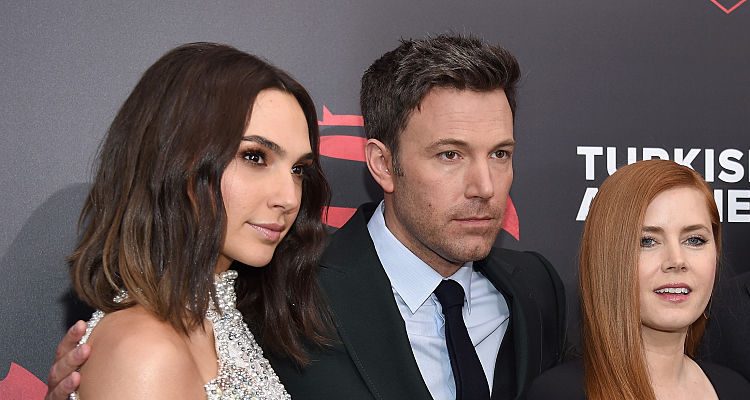 Warner Bros. has released a new Justice League photo on Twitter showcasing the Justice League superhero team of Ben Affleck as Batman, Gal Gadot as Wonder Woman, Ray Fisher as Cyborg, Ezra Miller as Flash, and Jason Momoa as Aquaman. The pic shows the superheroes exiting the Flying Fox, the multistory aircraft that serves as a vehicle and mobile headquarters for the superhero team.

Henry Cavill, aka Superman, is noticeably missing from the photo, likely because Superman died at the end of Batman v Superman: Dawn of Justice. After Superman gives his life for Earth, Wonder Woman and Batman recruit a super team to take on new threats to civilization, which also includes Flash, Cyborg, and Aquaman. Cavill’s Superman will likely return later in the second half of the movie. After all, Cavill is listed as a cast member for the film, as well as other Superman and Justice League projects.

When the original Justice League trailer debuted during the summer of 2016 at San Diego Comic-Con, DC and Warner Bros. released an image that featured Superman. Cavill himself has hinted that Superman returns, as he does in the comics. Cavill posted an Instagram shot of what appeared to be Superman in an all-black Kryptonian suit that he will wear when he returns to life after he died at the hands of Doomsday in the Batman v Superman film.

Let’s take a brief look at the training routines of Ben Affleck, Gal Gadot, and Jason Momoa for the Justice League film.

Ben Affleck was featured as Batman, aka Bruce Wayne, in Batman v Superman: Dawn of Justice and Suicide Squad (2016). Audiences will also see Affleck in a Batman feature film and Justice League Part Two. Weight gain was essential in order for Affleck to play Batman. After all, the 44-year-old had to look similar to a heavyweight and MMA (mixed martial arts) fighter. Affleck’s upper body workout allowed the actor to fit into the massive 75-pound Batman armor, aka the bat suit.

As for his diet, he would replace cow’s milk with almond milk and consume lean protein sources like chicken breast, egg whites, and protein shakes. He would also refrain from eating nightly carbs and would supplement with CLA (conjugated linoleic acid) to help increase his lean muscle mass and sculpt his abs.

Fans of the DC Universe are excited for the upcoming Wonder Woman solo film, which is going to take place during the World War I era. The movie will hit theaters June 2, 2017. Gal Gadot also appears in Justice League Part Two.

Some initially thought Gadot, a former model, would be too skinny for Wonder Woman, aka Diana Prince. However, the former Israeli Defense Force fitness trainer would quickly change people’s minds. Gadot gained 50 pounds of muscle to fill out her thin frame.

Jason Momoa will have his standalone Aquaman movie, and it will be officially released Oct. 5, 2018. Aquaman, aka Arthur Curry or the King of Atlantis, was also briefly featured in Batman v Superman: Dawn of Justice.

The 240-pound Momoa also needed to increase his muscle mass to portray Aquaman on the big screen. As a result, the Conan the Barbarian actor would work with trainers Eric Laciste and Mark Twight, who is the founder of Gym Jones. Momoa’s intense workout routine would include cable crosses, incline bench press exercises, military shoulder presses, pull-ups, and front squats. In a three-day period, Momoa would perform 110 reps of each exercise that totaled 330 reps altogether. Jason Momoa would also gain 20 pounds of muscle with a high-protein diet of lots of chicken breast.

When Justice League: Part One hits theaters later this year, audiences will get to see the full effects of the workouts and diet routines of Jason Momoa, Gal Gadot, Ben Affleck, and the other DC superheroes.