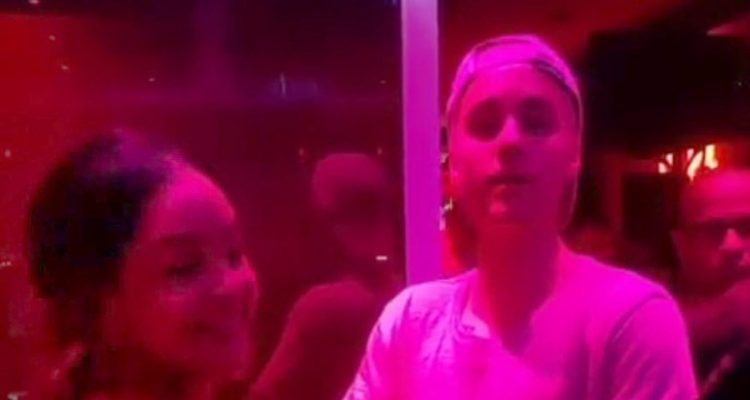 Justin Bieber partied it up at the Lotus Café in New York City prior to hitting the stage for his Purpose tour; he was spotted with a unknown female.

Bieber looked to be having a good time just moments before hitting the stage at his Madison Square Gardens concert.

Justin Bieber Gets Ready for His Shows: Justin’s Diet and Workout Plan

Justin Bieber has been on the road now for quite some time promoting his latest album, Purpose. One can only imagine how stressful being on tour can be, and it’s probably quite difficult to eat well and stick with a workout plan. And yet, despite this Bieber still manages to show off his six-pack every now and then.

As a Calvin Klein underwear model Bieber has to look the part, so he teamed up with trainer Patrick Nilsson to get that chiseled body. Nilsson told Hollywood Life that it actually took Bieber three years to look as good as he does.

Bieber grew up playing sports and so he’s always had an athletic build. Sculpting abdominal muscles requires a mix of cardio and a clean diet. Some effective exercises to help reveal your own six-pack include burpees, crunches, sit ups, and leg raises (anything that works the core, really), but of greater importance is cardio. The exercises will help abdominal muscles grow and gain definition, but if a layer of fat is covering it, no amount of crunches in the world will help them be visible.

Bieber’s diet plan consists of daily green juices, protein-rich late-night snacks if necessary, and when he’s in Canada he enjoys indulging in Tim Hortons. It’s also a good idea to avoid alcohol, drink plenty of water, and ensure you always warm up prior to a workout to avoid injury.

Hopefully, for his own sake, Justin Bieber didn’t overdo it at the Lotus Café in New York and still kept his diet in mind!