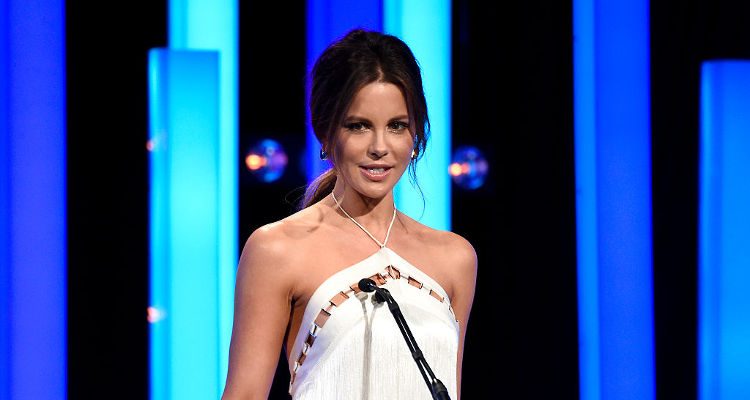 Stunning actress, Kate Beckinsale, has worked hard to maintain her athletic and fit body for her vampire warrior role as Selene in the fifth installment of the Underworld franchise, Blood Wars.

Beckinsale aka Selene has superhuman physical abilities: She performs brilliant leaps and applies magnificent force to strike her enemies. The actress confessed that she worked hard to fit her warrior role.

The stunning celebrity will be featured on the cover of Shape magazine in the January/February issue. She took to Instagram and posted a video, which was captioned, “BTS of my @Shape magazine Jan/Feb 2017 cover .

BTS of my @Shape magazine Jan/Feb 2017 cover . Pick it up on newsstands Jan 3 to find out how @gunnarfitness got me ready for @underworldmovie and for awkwardly standing about in my underpants in front of a Frenchman …Thanks @etienneortega and @italogregorio ❤️?

Shape magazine proudly posted on Instagram, “Need some motivation to crush your next workout? Let our Jan/Feb cover star @katebeckinsale get you moving…”

Need some motivation to crush your next workout? Let our Jan/Feb cover star @katebeckinsale get you moving. She works out 5 to 6 times a week even if she doesn't love every second of it: "I start out absolutely dreading it, do an incredibly punishing workout, bitch about it the whole time, and end up feeling 100 percent better when I leave.” PREACH, Kate. Find out what workout she loves-to-hate the most and why she dropped being a vegetarian for good in our link in bio. Don't miss her being a total badass in the fifth installment of the Underworld franchise, Blood Wars, in theaters January 6.

Kate Beckinsale revealed how working out can work as an antidepressant.  She told the magazine, “I start out absolutely dreading it, do an incredibly punishing workout, bitch about it the whole time, and end up feeling 100 percent better when I leave,” she added, “Working out is basically nature’s antidepressant.”

How did she workout for her warrior role in Blood Wars? How did she maintain her fit body and hone her flat abs? What did her diet plan consist of? Here’s a sneak peek to her workout and diet regimens.

Kate Beckinsale has an enviably fit body. She reportedly spent hours in the gym with her celebrity trainer, Gunnar Peterson, for the filming of Underworld: Blood Wars. The film is expected to hit theaters on January 6.

She worked hard with her trainer for five or six times a week. “During our sessions we have long talks about teenagers, and then suddenly one day I find that my ass is in a lot better shape than I thought it was!,” she noted in Shape.

Her workouts included circuit training, which was interspersed with brutal cardio.  “But the thing I like about circuit training is that you’re never doing one thing for very long. You get to the point where you almost can’t bear it, and it changes to something else,” she added.

She loves yoga and was trained by yoga teacher, Mandy Ingber. The actress also took to Instagram and posted a video of her yoga workout in the recent past. This video was captioned, “katebeckinsalePump It Up @weheartyoga @mandyingber”

She confessed that hardcore workouts made a big difference in her life, which is also probably the secret to her flat abs. She shared, “I have a lot of internal energy, and intense exercise helps me channel that energy. I find balance by doing a workout that makes me pour sweat. I never was that girl before, but I am now.”

Kate Beckinsale followed a structured diet plan to complement her workout regimen. She used to be a vegetarian, but she switched to a meat-based diet during the filming of Pearl Harbor to gain energy. She said that she and her daughter, Lily, believe in eating clean.

She said, “We have a lot of sautéed vegetables like brussels sprouts and broccoli and chicken and fish. Also, I don’t drink alcohol. I feel (the effects) very quickly, so I’ve never actually had an entire glass of anything alcoholic.”

When it comes to her favorite foods, she likes to have a Chinese Chicken salad. During the filming of Blood Wars, the actress included eggs and oats for her breakfast.

She usually chose to have a chicken wrap or a vegetable for lunch, and have some fish and vegetable for dinner. She also believes in indulging on her cheat days.

Many of Kate Beckinsale’s fans will look forward to her upcoming film Underworld: Blood Wars. Meanwhile, fitness fans should look forward to getting a copy of the upcoming January/February issue of Shape magazine featuring the actress. To stay in shape like Beckinsale, why not adopt her healthy lifestyle.