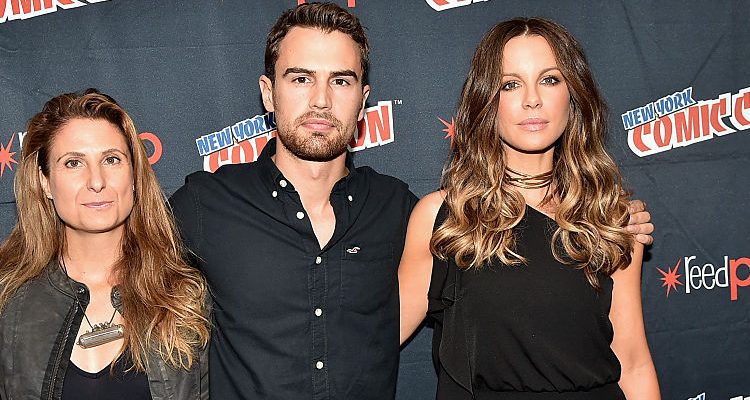 Kate Beckinsale will be reprising her role as vampire heroine, Selene, in the upcoming fifth installment of the Underworld franchise entitled, Underworld: Blood Wars. Joining the cast is Divergent actor, Theo James, who is returning to his role as David, one of Selene’s allies. The franchise is known for its intense action sequences that can be a physical strain on anyone. Keep reading to find out how these two stars prepared for their roles.

Contrary to what you may think, the focus isn’t necessarily on weight loss when Kate Beckinsale is getting ready to don her signature leather catsuit costume. She’s expressed that she is wary about overdoing it in the gym as, “nobody wants to be terribly skinny with a cat-suit hanging off them.”  In fact, the 43-year-old actress revealed that she often eats more than normal in order to make it through grueling sessions at the gym that are meant to tighten and tone her already lean figure.

For the 2012 installment of the franchise, Underworld: Awakening, Beckinsale worked with celebrity trainer, Ramona Braganza, to achieve a toned and curvy figure without bulking up. Braganza has stated that the star prefers yoga-based exercises, and she incorporates them into her 3-2-1 training method when creating a program for her. The 321 method consists of three circuits of cardio work, two circuits of strength training, and one circuit of core work to ensure a full body workout.

Kate Beckinsale was lucky enough to have a chef on-site while shooting Underworld: Awakening, and had meals prepared following Braganza’s 3-2-1 Nutrition Plan as well. The basis of this plan is to consume three meals, two snacks, and a minimum one liter of water per day in order to keep your metabolism working and fend off any cravings.

Theo James is also familiar with the preparation needed to take on a heavily action-based role. For his role as Tobias “Four” Eaton in the Divergent series, James made it his goal to gain weight in order to look tougher and more intimidating. He accomplished this by increasing his calorie intake and Muay Thai training six to seven days per week.

James also sparred with a trained MMA fighter multiple times every week.  Since the film required him to do many fight scenes, this proved to be effective not only to help him bulk up, but to give him a realistic fighting style as well. Divergent’s fight coordinator, J.J. Perry, also worked with James to increase his stamina and teach him the proper striking methods used in many fight scenes, as well as instructing the young actor on the correct way to fall and throw an opponent.

Kate Beckinsale and Theo James are not new to action films, so it’s safe to say that both understood what they were getting into when they signed on for the fifth Underworld installment. Both actors have trained hard in order to deliver in similar roles before, and many are looking forward to seeing them again on the big screen when the film is released this Friday.

Bullock, A., “’I eat more in catsuit mode or I’d never get through the gym sessions’: Kate Beckinsale explains her workout routine for reprising her character in the Underworld movies,” Daily Mail web site, November 27, 2016; http://www.dailymail.co.uk/tvshowbiz/article-3975864/Kate-Beckinsale-explains-workout-routine-reprising-character-Underworld-movies.html, last accessed January 4, 2017