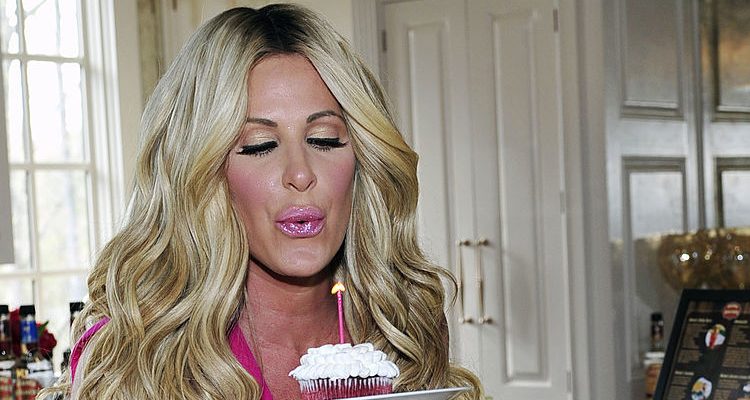 Kim Zolciak has always been the talk of the town, sometimes for her Photoshopped selfies and sometimes for her parenting skills. When her daughter, Brielle Biermann, complained about her lips, rather than making her feel confident, Zolciak insisted her to get them fixed!

While her behavior looks doubtful, she is concerned about her daughter’s eating habits and tells her to slow down on the fast food. “Brielle needs to stop eating,” she told the Bravo cameras. “What do they call it? The ‘Freshman 15?’ Although she’s not in college.”

The Don’t Be Tardy star herself loves food but eats healthy and wants to instill the same habit in her children, too. She wants them to look and feel healthy, just like her. Let’s take a look at her fitness routine.

Zolciak consistently expresses her love for food on Instagram—especially desserts. This is what she said in one of her posts:

She does receive a lot of negative comments about her body but says she loves it the way it is. The harsh comments make her feel as though she should stop uploading personal pics of herself and her children.

She regularly shares her fitness secrets and some inspiring messages to her fans. She drinks nutritional shakes every morning as she says they help keep her metabolism high. Though she says she keeps away from pork and red meat, she was spotted enjoying some pepperoni pizza a couple of times. She has a huge sweet tooth but that doesn’t bulk her up as she indulges in moderation. She wishes the same for her daughter and so she fat-shamed her!

Looking at her ripped shape and flawless skin, it seems as though she stopped aging. It is hard to believe that she is a mother of six!

Zolciak revealed on Instagram she would be doing a cleanse and that her chef, Tracey Bloom, will help her with it. She does the cleanse every three months. She drinks a diet formula twice a day—in morning and before going to bed—to stay in shape and satisfy her sweet cravings.

Zolciak suffered a mini-stroke when she was a contestant on Dancing with the Stars last October, and is taking immense measures to maintain a healthy lifestyle.

Kim Zolciak’s Instagram is full of videos and photos that reveal her weight loss and wants to inspire fans that want to lose weight. She also mentions that her pics aren’t Photoshopped and that she works out hard for that slim and lean body. “I’ve been working out with my husband, he kicks my butt,” she told ABC News. “The mind of an athlete is like no other. This man is incredible. We have everything you could dream of to work out, he pushes me and when it starts to burn, I won’t quit and he won’t let me.”