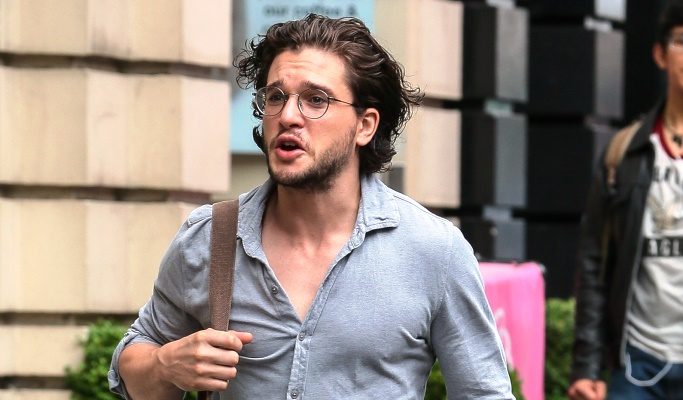 Game of Thrones’ Jon Snow is a lead character in the HBO TV series, played by British actor Kit Harington. The 29-year-old also starred as Milo in the ancient disaster film Pompeii in 2014. Kit Harington’s diet and workout plan for both roles is very intense…

Kit Harington follows a calorie-controlled diet no matter the project. The Kit Harington Pompeii workout required the action star to spend five weeks building muscle, and he bulked up fast with lots of reps and a 5000-calorie daily diet. For Game of Thrones, the English actor is required to expertly sword fight while donning massive fur coats.

Kit Harington has a body type with a bit of stockiness, but overall he is naturally thin. As a result, he had to train that much harder in order to prepare for the parts.

What is Kit Harington’s Gym Workout?

Kit Harington’s gym workout for Pompeii and Game of Thrones is slightly different. For Game of Thrones, Harington’s trainer Dalton Wong focused on compound exercises that mimic on-set moves. Basically, Harington did lots of full-body movement exercises instead of isolation exercises. Cable routines allowed his body to achieve a fuller range of movement because the goal is to get a sword around his head.

Two months prior to Game of Thrones’ third season, Harington badly injured his ankle. As a result, Wong concentrated on increasing Harington’s range; if the actor hurt his ankle on a squat, he wouldn’t go so deep.

Kit Harington’s Pompeii trainer Nuno De Salles says the actor was actually in pretty bad shape before he prepared for the role of Milo. De Salles says Harington sometimes hit the gym a little too hard; he even had to slow him down. He trained during 60-minute sessions, for six days weekly.

Every day the workouts were different. This helped Harington learn stunt training, so his body wouldn’t plateau with one specific routine. For instance, Harington would perform a chest workout one day, followed by biceps and back, legs, shoulders and triceps, abs and core, and just arms with a biceps and triceps workout.

As mentioned, Kit Harington follows a calorie-controlled diet. Harington’s 5000-calorie diet contained lots of good carbs like sweet potatoes and brown rice, along with chicken. He also ate a combination of salt and 15 herbs called Herbamare to season his food.

Harington also had a cheat day in the diet to help control his metabolism and manage his food cravings. That being said, he doesn’t cheat very often. This allows the action hero to maintain his solid muscle mass for his acting roles. Now Kit Harington, aka Jon Snow, is playing leading action stars and loving every minute of it.