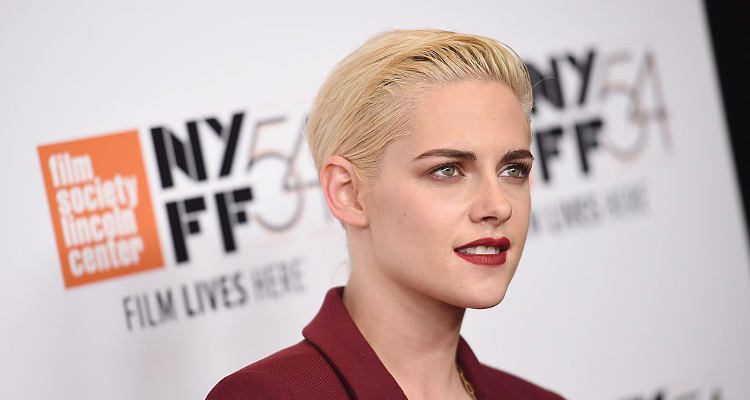 Kristen Stewart’s new movie, Certain Women, comes out Oct. 14 and is already garnering great reviews. For the premiere of the movie at The New York Film Festival, the 26-year-old actress wore a blood red Sandro suit with a double-breasted jacket that she wore open without a bra. It was a fierce look that showed off a bit of her toned stomach.

All she wore under the jacket was a long gold body chain. The blazer was matched with a straight-leg trouser and the star wore her platinum blond hair slicked back. She topped the look off with a deep red lip and black lace-up heels.

Stewart first got her start opposite Jodie Foster in Panic Room, but she is probably best known for her role as Bella Swan in the Twilight series movies. Other films she has starred in were Cold Creek Manor and Into the Wild. She was the first American actress to win a César Award (French Oscars basically) for Best Supporting Actress for her performance in Cloud of Sils Maria.

Stewart says that she only really started working out and worrying about her figure when she started filming for Snow White and the Huntsmen. Before that, she says, she had never worked out. Stewart said in that same interview with GQ magazine that she only ate stuff out of a box for the role – though what that means exactly is unclear because boxed food isn’t necessarily healthy and should be avoided for the most part.

But the box-based diet, which she failed to elaborate on, seems to have worked for her. Exercising, though, made her feel more energized and stronger; and it would because those are two of the amazing benefits of a regular fitness program.

It helped the actress to increase the positive feelings she had about her self-image. She says she felt like she looked like a boy for the longest time, and finally, thanks to exercising, she feels like a woman.

Boxed food aside, Stewart does her best to maintain healthy eating habits – though whether she follows any particular diets is not known. She does love Mexican food and eats it quite a bit. For the most part, Mexican food is quite healthy and a good source of nourishment because of the fresh ingredients that are used in many dishes.

Tomatoes and avocados are two common fruits that are high in vitamins and minerals, and healthy fats for the avocado. Stewart prefers to eat lighter foods overall, which means fewer carbs and more fruits, vegetables, nuts, grains, and legumes.

As for workouts, Stewart likes to go to the gym regularly, but riding is her favorite workout. Her family has a large farm in California where she does most of her riding. Stewart is also a great dancer and is a strong swimmer.

Swimming and dancing help her maintain her figure and keep her weight down. Both exercises are phenomenal cardio activities and are excellent at building and toning muscle.