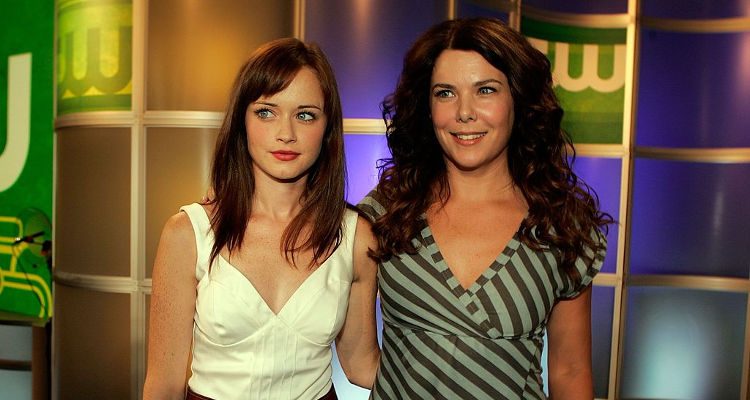 Gilmore Girls: A Year in the Life stars, Lauren Graham and Alexis Bledel, looked stunning at a fan event in Berlin, Germany. The two stars play a mother-daughter duo in the upcoming miniseries which is set to release on Netflix on November 25.

Graham plays the role of Lorelai Gilmore, and Bledel reprises her role as daughter, Rory Gilmore. With a comeback after nine years, there is a lot of excitement among fans about the miniseries.

Graham and Bledel looked incredible and super fit during the fan event which was held on November 10. Graham posted this pic on her Twitter account, and tweeted, “Thanks, Berlin and @BILD, for hosting me and @alexisbledel. We enjoyed speaking to reporters and fans and seeing some old friends.”

The Netflix twitter account, which updates fans with the latest Netflix series and films in Germany, Austria, and Switzerland also posted this pic of the glamorous stars at the event.

The Gilmore Girls stars donned elegant outfits in shades of black. While Bledel wore a black long-sleeved cut-out top and a gray and black pleated skirt designed by Dion Lee, Graham chose to show off her cleavage in a plunging little black dress.

This video gives a sneak preview of the Gilmore Girls at the Netflix event in Berlin, Germany.

The miniseries is reported to return with four, 90-minute episodes centered around the lives of Lorelai, Rory, and other Stars Hollow stalwarts. This YouTube video is an official trailer of the Gilmore Girls: A Year in the Life.

Graham believes in following a disciplined workout routine to stay super fit. She says, “I’ve learned a lot from trainers over the years, but mainly that you need discipline to stay in the gym.” She works out with her personal trainer, Michelle Lovitt. She does a 90-minute session several times a week. Her workouts also include Pilates, spin classes, and running intervals or walking on the treadmill.

The actress uses a meal delivery service, Paleta, to focus on healthy eating. She feels Paleta helps her to keep her calories down and eat well. She says that she doesn’t prefer a lot of variety in foods. She shared with SELF magazine, “I like having the same thing over and over: assorted lean proteins, arugula salad, quinoa or brown rice with soy sauce, olive oil, lemon and salt. Those ingredients can pretty much get me through the week.” The actress feels that people should try using a delivery system and says, “Even if you can afford just one week, it can be eye-opening to see exactly how much (or little) 1200-1500 calories is.”

Graham feels that healthy eating is important and using the meal delivery services are a convenient option. She says that while cooking at home people should focus on portion control, high protein, and healthy substitutions, and advises, “Find what you like and try not to stress about it.”

The 35-year-old celebrity likes to follow a clean lifestyle to maintain her fitness. She believes in workouts and healthy eating. Her workouts include cardio exercises, yoga, and Pilates. She prefers outdoor activities and engages in them quite often.

Bledel prefers preparing her own meals, as she feels that it is a healthier option than going out to eat. Her diet focuses on healthy, organic, and local foods. She also treats herself with an occasional pizza or drink.

While fans are excited about the upcoming Gilmore Girls: A Year in the Life miniseries. It is a treat to see the stunning stars, Lauren Graham and Alexis Bledel looking super fit as always at the recent fan event. If you wish to maintain your fitness, try adopting the workout routines and diet plans of the Gilmore Girls.