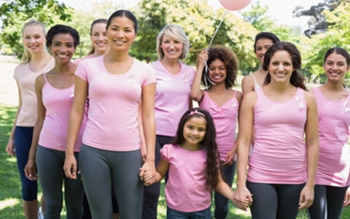 Breast cancer is the leading cause of cancer death in females living in the U.S. today. It is a disease commonly associated with women over the age of 50. Although there are genetic forms of the disease which affect younger age-groups, most of the effort at controlling this disease have been placed upon early prevention. In this article, we’ll be discussing about 4 amazing foodstuffs that can help women lower the risk of breast cancer.

Recent evidence has indicated that green tea may be useful in the fight against various forms of cancer, including gastrointestinal, prostate cancer, breast and lung cancer. Green tea may be able to absorb cancer-causing free radicals, enhance the benefits of chemotherapy drugs, and interfere with cancer cell growth.

Vegetables within this category of vegetables include broccoli, cauliflower, Swiss chard, cabbage, and kale. These important vegetables contain certain phytochemicals that have been shown to inhibit cancer cell growth. These powerful chemicals collect free radicals, decrease their inflammatory response, and interfere with the way your hormones bind to cancer cells. One of the most exciting of these chemicals is indole-3-carbinol, which is capable of decreasing the growth of breast cancer cells. The other major chemical, sulforaphane, has also been shown to decrease the growth of cancerous cells.

The consumption of olive oil has been touted as a great method to decrease the risk of developing breast cancer. There’s a known correlation between breast density and breast cancer. A decrease in density of one percent can potentially translate into a nearly two percent reduced risk of breast cancer. Olive oil is a rich source of hydroxytyrosol phytochemical, one of the most powerful and naturally occurring antioxidants. The unique chemicals within olive oil, including hydroxytyrosol, have been shown to inhibit a process known as inflammatory angiogenesis, which is a key process in breast cancer development.

This “miracle herb” has been used for centuries in the Eastern and Middle Eastern cultures to improve health and longevity. It’s no coincidence that certain populations who ingest the highest amounts of this herb have lower rates of cancer—so should you add garlic to your list of cancer-fighting foods? Yes! The sulphur-containing allium compounds contained within garlic are thought to provide its medicinal qualities. The chemicals in garlic can directly reduce cancer cell growth and also protect our cells from cancer-causing compounds.