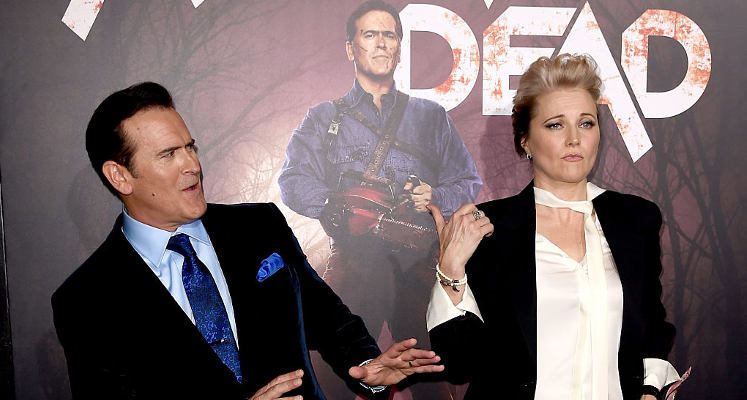 Lucy Lawless, who stars in Ash vs. Evil Dead with co-star Bruce Campbell, is sharing her fitness routine and nutrition secrets. Many can remember Lawless from the popular television show Xena: Warrior Princess, which was a series spun off from Hercules: The Legendary Journeys with a fantasy-like twist.

The New Zealand-born actress turned 48 this year and is looking incredible despite having three children. Let’s find out the Lucy Lawless workout routine. From fight training to stunts, let’s discover how Lawless stayed in shape to become the warrior princess.

For her role as Xena: Warrior Princess, Lucy Lawless performed many of her own stunts. Although she had a stunt double for the more intense action scenes, she still wanted to make the part look as convincing as possible. Since she was playing an ancient warrior princess, she followed a strenuous training program in the early days of the role that she also tried to balance with her long days on set.

At first, Lawless worked out five days per week. She did this after 14-hour days of shooting (whoa!). But soon enough, she suffered from exhaustion and burn out. After deciding to switch to a less intense schedule that allowed her to do most of her workouts from home, she became much more successful in achieving her desired results.

Pilates became her favorite and most effective workout for getting into the shape for the role of Xena. Pilates’ focus on increasing flexibility, strength, endurance and body awareness helped her to tone her body in a functional way. It also helped her look amazing enough to kick some serious butt.

During that time, Lawless was doing Pilates workouts three times per week in addition to her filming days. To ramp up the intensity, Lawless chose to do more intense workouts to burn even more fat and build more muscle. She incorporated Pilates, walking, jogging, lifting weights and interval training.

Lawless did different training for several of her other action roles, but she maintained some of the basics like cardio, weight lifting and strength training in her workouts.

When it came to her diet plan, Lawless allegedly followed the popular Zone diet. This diet places an emphasis on protein and vegetable consumption and limits carbohydrate intake. By keeping carbohydrate intake low, she is allowing her body to shed any excess fat.

High protein intake will help fuel her through her busy days and build as well as nourish her muscles after intense workouts. A typical day of meals might look like the following:

Lunch: 1 cup of broccoli and 4 ounces of lamb

Dinner: 1 cup of green vegetables with 6 ounces of boiled sole

Snack: protein bar or an apple

Lucy Lawless is pretty nutrition-minded, and two of her favorite foods include kumara (a native yam from her homeland of New Zealand) and puha, which is a kind of collard green.