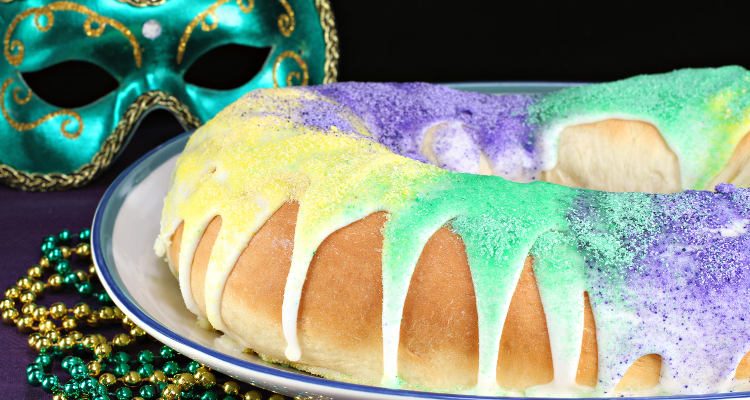 Willa Jean was founded in August 2015. They make use of the freshest local ingredients. Willa Jean has a variety of king cakes like Valrhona caramelized milk chocolate and espresso. You can order it online or dine in at this restaurant and bakery which also provides breakfast, lunch, and dinner throughout the week.

Their king cakes have a shiny, edible glitter with airbrushed-looking, glossy icing over a buttery pastry with a cream cheese center. They also have king cake macaroons.

This New Orleans bakery continues to serve its delectable galette des rois that is made from layers of puff pastry with an almond cream center. Their king cakes have a variety of fillings like cream cheese, cinnamon, and strawberry.

In addition to their chocolate-filled king cakes, they also have almond-infused queen cakes at $20.00 each. The cakes are made from homemade brioche dough that is less sweeter than grocery store ones. They offer free delivery with orders more than $100.00

They have large, or gigantic king cakes, with or without filling, and delectable old-school king cake with no icing.

They have mini Boudin and Bacon King Cake, with or without cream cheese filling. This New Orleans bakery is renowned for signature apple and goat cheese filling.

They have cinnamon-infused Danish dough, lighter icing, and distinct flavors like Cajun Kringle with pecan-praline filling.

For those who don’t want a huge king cake have the option of mini king cakes with cinnamon, strawberry, and cream cheese filling. They have baby pigs tucked inside. Their big cakes have a filling of peanut butter, banana, and house-cured bacon topped with marshmallows.

Manny Randazzo has a braided, traditional version of king cake that is made from their original recipe dating back 50 years. Their most popular flavors include Pecan Praline and The Royal.

The signature items from this bakery is shipped all over the world. They have a wide variety of distinctive fillings like pineapple, and there are doubloons and beads hidden in few.

They have won the People’s Choice Award at the King Cake Festival for their traditional galette des rois. They have a Ponchatoula King Cake, stuffed with cream and strawberries.

They have eight different flavors of king cake including Chantilly-filled, Creole cream cheese-filled, and a cinnamon-apple. You don’t need to go in to get your king cake as they have the option of curb-side pick up every Friday until Mardi Gras.

They have traditionally-prepared king cakes ideal for those with food allergies or dietary restrictions. They make gluten-free and vegan cakes as well.

Enjoy these Mardi Gras king cakes in New Orleans and have a happy Mardi Gras 2017.