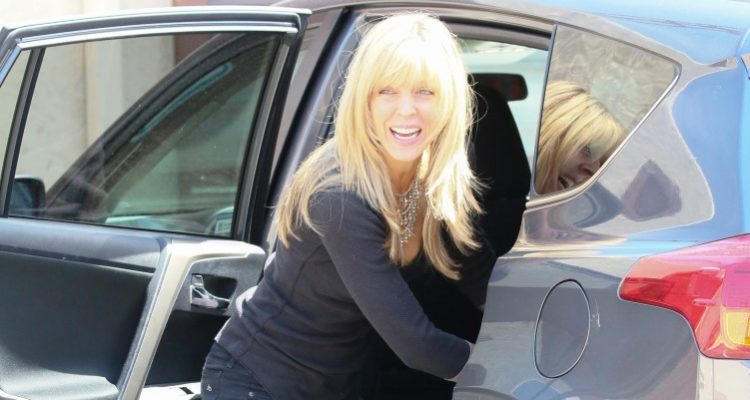 Marla Maples is an actress, TV personality, and former wife of celebrity businessman and Republican presidential nominee Donald Trump. Their marriage ended in 1999, but they a daughter, Tiffany Trump. Maples recently posted a photo on Instagram enjoying brunch with her daughter and Tiffany’s boyfriend Ross Mechanic.

How happy was I to treat my daughter & Bf for Sunday Brunch ? loving & appreciating all #motherdaughter & beau time ? tiffany trump & Ross Mechanic

Aside from the brunch photo with Tiffany and Ross Mechanic, the mother and daughter were also pictured in fit clothing in front of the Love sculpture at the University of Pennsylvania campus (Tiffany Trump just graduated from there in May), and Maples looks stunning. This year she even competed on season 22 of Dancing with the Stars with professional dancer Tony Dovolani.

How does Maples stay in such good shape? When she was in college, she was 25 pounds heavier than her current weight, and at the time she tried several exercise fads and diets. But what ended up working best for her was a visualization process. She could see herself running down the beach feeling energized and vibrant, and she would take those positive thoughts and turn them into reality.

Another health secret of hers has been a vegetarian, almost vegan, diet. She was a strict vegetarian for years, but now she sometimes eats meat. She avoids dairy, and consumes gluten-free foods as well as organic foods from her organic garden. Her body can tolerate the occasional organic chicken, lamb, or steak, and instead of dairy, she opts for rice milk or almond milk.

Maples avoids dairy because she had horrible skin reactions in college from eating pizza. She found herself having breakouts and waking up feeling bloated. She says that it was tough to cut out dairy, at least at first, but now she understands the consequences and wants to feel her best. She finds that without dairy, her skin and digestion have improved.

Marla Maples also understands that there is more to overall health than the physical. She says that she believes in the connection between mind, body, and spirit, and that we should take care of ourselves from the inside out. To that end, she cites daughter Tiffany Trump has an inspiration, and was delighted to share a brunch meal with her daughter and Tiffany’s boyfriend, Ross Mechanic.