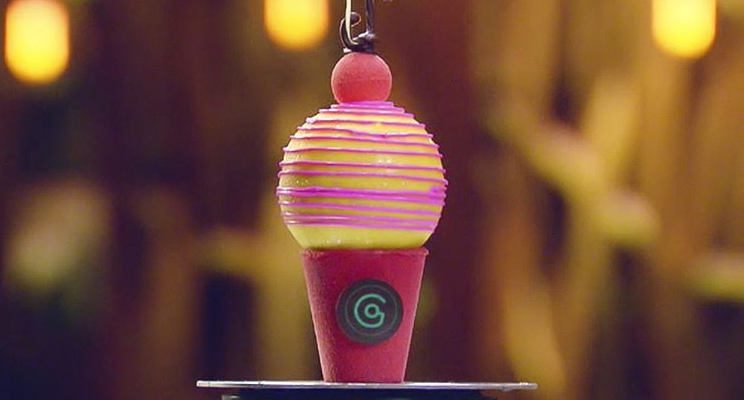 Bryan Zhu, Samuel Whitehead, and Trent Devincenzo were delighted to see an incredible ice cream float. But, the fact that they had to create one horrified them. Eventually, Bryan failed to perform in the Pressure Test, which brought about his elimination.

If you want to try this MasterChef Australia dessert yourself, here is the complete recipe.

Preheat sous vide to 70°C and another one to 30°C. In the meantime, heat a one-liter copper saucepan over medium heat. Add 120 grams of sugar and 50 grams of water to the pan and occasionally stir until the sugar melts and the mixture reaches 118°C.

Place egg yolks in the bowl of a stand mixer and whisk until pale. Once the sugar mixture reaches 118°C, pour it into the yolk mixture and keep the motor running to make a pâte à bombe. Whisk continuously until the mixture cools.

In another copper saucepan, add the remaining sugar and water and heat over medium heat until the temperature reaches 118°C. Put the egg whites in a stand mixer bowl, and mix until soft peaks form.

Once the sugar syrup reaches the desired temperature, pour it into the egg mixture with the motor running. Whisk the mixture until it becomes thick and glossy. Let it cool down.

Add the cooled meringue to the pâte à bombe mixture. Whisk on medium speed until combined. Do not over mix. Set aside.

In a bowl of a stand mixer fitted with a whisk attachment, add the thickened cream. Then, add the scraped vanilla seeds and whip until it forms soft peaks.

Gently fold the whipped cream into the egg yolk mixture until just combined. Add the chopped cherries and fold again.

On a flat tray, place a sheet of seven-centimeter half sphere molds. Level the surface with a spatula. Place the molds in a blast chiller until completely frozen.

Once it freezes, remove it from the blast chiller and unmold. Using your palms, warm the flat side of two half spheres and stick them together.

Use your fingertips to smooth the seam gently. Insert a skewer into the ball and stand the ball up in a wooden holder. Return it to the freezer to harden.

Put the cocoa butter and white chocolate in a Thermomix jug set to 60°C on speed 2. Mix for about eight minutes, or until the mixture melts completely.

Once it melts, divide the mixture between two stick blender canisters. Add a bit of yellow food color and titanium dioxide to one canister. Blitz it with a stick blender until the color mixes well. Set aside.

Add red food color to the second canister and blitz it. Transfer the red color to a spray canister. Set aside.

Put the cream and glucose in a Thermomix jug. Set it to 40°C and speed 2 for five minutes to gently warm the mixture. When the mixture reaches 40°C, add the white chocolate and scraped vanilla seeds.

Mix for seven minutes, at 40°C and on speed 2 until mixture is well combined. Then, add the titanium dioxide. Mix on speed 6 for 10 seconds.

Then, add the food color. Mix it on speed 6 in 10-second intervals, until the mixture becomes smooth and emulsified.

Transfer the ganache to a glass bowl, and let it sit in the blast chiller for three minutes. Do not let the ganache set. Put half the ganache into a piping bag and set aside.

Put 300 grams of chocolate in a microwave-safe plastic bowl. Melt in 30-second intervals, until chocolate reaches 50°C. Remove the bowl from microwave.

Then, add the remaining chocolate, a little bit at a time. The added chocolate should melt between each addition. Stir until the chocolate melts, and the temperature of the mixture reaches 27°C.

Then put the bowl back in the microwave. Heat in 10-second intervals, until the chocolate reaches 31°C. Stir between the intervals.

Place a sheet of bouchon molds onto a baking tray. Using a large metal spoon, fill two of the molds to the top with the tempered chocolate. Let it sit for a minute.

Turn the molds over and let the excess chocolate drip. Level off the surface of the molds with an offset spatula.

Turn the molds upside down and place them on a tray lined with acetate. Put the tray in the freezer to let the chocolate set. Put the remaining tempered chocolate into a piping bag.

Line a tray with an acetate sheet. Make a three-millimeter opening in the piping bag and pipe four discs of tempered chocolate, about 12 millimeters in diameter. It will form the seal for the chocolate truffle shell.

On the acetate sheet, pipe four slightly bent lines, with a curl at one tip (this will form the cherry stems). Place a silicone sheet of half sphere molds onto a flat baking tray.

Put the truffle shell onto the silicone mold to prevent it from rolling. Leave a little room at the top of each half shell. Fill it with the reserved cherry liqueur, using a syringe.

Ensure the truffle isn’t leaking by placing it upside down. Place the truffle on a tray. Put it the in the freezer for 10 minutes to let it set.

Now, put the tempered chocolate piping bag into a large ziplock bag. Seal it and put it in the sous vide machine preheated to 30°C to keep warm.

Unmold the chocolate cones once they set. Line a small round tray with baking paper and transfer them to the freezer to harden.

Put the methyl cellulose and lukewarm water in a small bowl. Whisk to combine and set aside to activate.

Put the cream and glucose syrup in a Thermomix jug. Set it to 50°C and on speed 2 for six minutes. Keep the machine on to let the mixture stay warm.

Then, add dextrose, butter, cocoa powder, and dark chocolate. Mix for a further six minutes at 50°C on speed 5.

Add the methyl cellulose mixture and continue to mix for another five minutes at 50°C on speed 5. Transfer the mixture to a squeeze bottle. Set it aside in the freezer.

Place a small stainless steel saucepan on an induction cooktop set at 200°C. Sprinkle one-third of the isomalt granules into the saucepan and allow to melt. Occasionally stir with a large metal spoon to melt the isomalt.

Once it melts, sprinkle another one-third of the isomalt granules into the pan and continue melting. Again, sprinkle one-third of the granules and melt. Remove the pan from the heat and stir continuously to bring down the temperature of isomalt to 100°C.

Add the platinum silver powder and mix. Once combined, set the mixture on an induction top at 100°C to keep warm.

Remove the semifreddo ball from the freezer. With the help of a stick, dip it in the yellow color mixture. Rotate to coat it evenly.

Let the excess mixture drip off. Make the ball stand upright to prevent it from forming a drip point. Let the chocolate layer set and dip it again. Repeat the entire process.

Place the ball on the stick back into the wooden holder. Put it in the blast chiller to harden.

Remove the chocolate cones and truffle from the freezer. Place them on s lined baking tray.

Spray the red colored mixture on the truffle shells and chocolate cone. Put them back in the freezer for five minutes.

Once the chocolate cone sets, remove it from the freezer. Put the truffle on the tray containing the cherry stems. Put it back in the freezer.

Pour the non-freeze dark chocolate sauce into the chocolate cones to about half way. Put the cones in the freezer.

Remove the semifreddo ball from the freezer. Then, remove the stick and place it with a drop of glucose on a round tray lined with a Silpat mat.

Put the tray on a motorized turntable. Take the piping bag containing the pink vanilla white chocolate ganache and create a spiral pattern. To do that, start from the top and pipe the ganache around the sphere.

Put it into the blast chiller to set.

Once the ganache sets, remove it from the blast chiller. Take the piping bag containing the tempered chocolate. Pipe chocolate on the rim of the chocolate cone and place the ball on it.

Transfer the ice cream to the freezer.

Put water in the canister of a stick blender. Sprinkle the methyl cellulose and xanthan gum over the top. Blitz it until the mixture is just smooth and white.

Add 73 grams of the hydrocolloid mixture to the isomalt. Stir to incorporate it completely. Leave the mixture on the induction to keep warm.

Attach one end of a plastic hose to a helium tank. Dip the other end of the hose into the isomalt mixture. Swirl to coat it with the mixture.

Lift the hose slowly out of the isomalt mixture and release the gas slowly at a steady speed. As the balloon starts forming, turn the hose right side up. Continue to release gas to form an isomalt balloon.

Once the balloon forms, wrap the fruit leather string around the bottom of the balloon. Avoid touching the balloon. With the help of the string, seal the balloon and remove it from the hose.

Remove the ice cream from the freezer. Wrap the bottom of the fruit leather string around the curly tip of the cherry stem. Stick the bottom end of the string to the stem with the tempered chocolate.