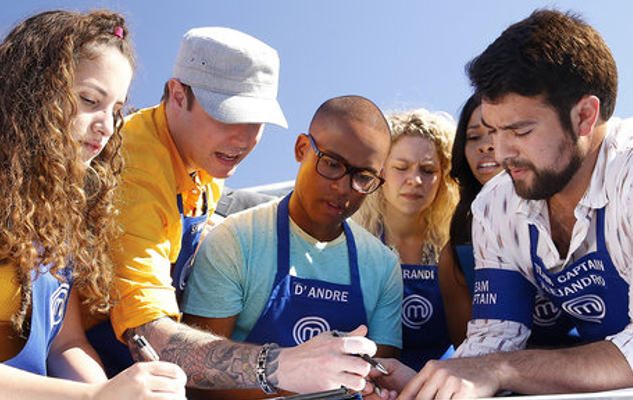 MasterChef U.S. Season 7 Episode 9: “A Piece of Cake” lived up to viewer expectations. It was expected to be one of the most dramatic episodes of the season, and Oh Ramsay, it was! Gordon Ramsay and Christina Tosi divided the 12 contestants into two teams of six. The Red team and Blue team participated in what was dubbed the Sweet 16 Birthday Challenge.

For the challenge, contestants were required to cook for perhaps the most fickle and hard-to-please foodies: teenagers. The teens were brought in to celebrate their 16th birthdays and devour some mouth-watering dishes. Both teams had one hour to cook 30 dishes for the hungry teenagers.

The teens seemed to love the Red Team’s candied bacon—not so much the raw chicken—apparently some of the chicken wasn’t cooked thoroughly enough, much to Ramsay’s dismay. But hey, nothing says sweet 16 like a gnarly case of food poisoning.

The Blue Team’s dish seemed to go over well, despite group infighting between Nathan and Andrea (and, well, Nathan, vs. everyone else). He had trouble chopping a tomato and spoke up at the oddest, most inopportune moments.

The (not-so) sweet 16-ers then decided which team cooked the better dish and the seafood triumphed. Shrimp. Yes, shrimp was voted the better dish by a whopping 80% of the teens. The Red Team’s chicken dish failed to impress and the losing contestants gobbled their way to the Pressure test.

The Blue team was safe from elimination, leaving behind contestants from the Red team to compete in the Pressure test—and, I gotta say it—it wasn’t a piece of cake. All six members were asked to replicate Christina Tosi’s three-layer cake in 90 minutes. Judges dutifully observed their efforts and stopped by each station to critically inspect. The highlights: Judge Edward Lee says Eric’s lemon sponge cake with white chocolate ganache had little icing and made him feel depressed. Ouch! Speaking of frosting, Shaun started frosting his cake too early and almost hyperventilated while wiping the melting frosting with a paper towel. Still, he delivered a masterful three-layer raspberry cake.

MasterChef U.S. Season 7 Episode 10 airs on August 3, 2016—and it should be even more dramatic from the previews. Apparently, the ‘weakest links’ from the previous challenge will face off in the elimination challenge. Get ready for another exciting episode!