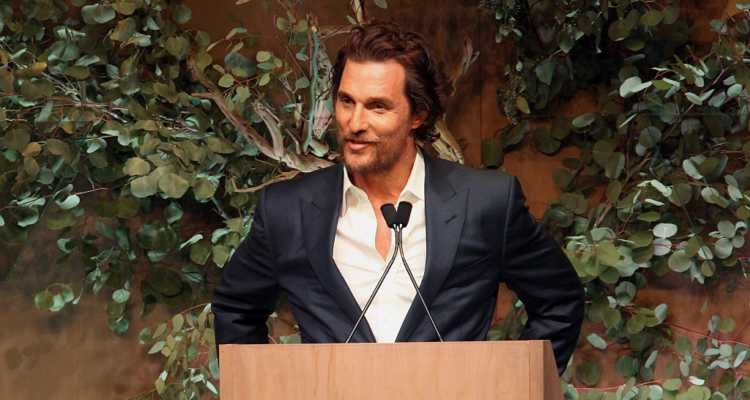 Actor Matthew McConaughey is always committed to do whatever it takes for his movie roles. For instance, the 47-year-old gained 40 pounds for the upcoming movie Gold, which hits theaters on Christmas Day. McConaughey will portray a luckless and bald Nevada businessman named Kenny Wells, who ventures to the Indonesian jungle in search of gold.

The actor is now losing weight with some serious cardio workouts, and was seen running in Los Angeles on Wednesday, Dec. 7. McConaughey says that his wife Camila Alves appreciated his extra weight gain.

Gold director Stephen Gaghan says that the overweight look was necessary for the movie. When McConaughey was 40 pounds heavier, his model wife did like the curvy figure, as did their children Levi, 8, Vida, 6, and Livingston, 3.

McConaughey’s nickname from his kids during this overweight time was Captain Fun because the actor said ‘yes’ to everything. For instance, Friday was usually pizza night, but at that time the kids could eat pizza or any food whenever they wanted.

It is not the first time McConaughey was required to make drastic changes for a movie role. For example, McConaughey would buff up to play a stripper named Dallas for the comedic drama Magic Mike (2012).

McConaughey later earned an Academy Award and Golden Globe for best actor for the biopic Dallas Buyers Club (2013). McConaughey dropped 50 pounds for the role of Ron Woodroof who is diagnosed with AIDS, and then works around the system to get himself and other patients the necessary medication.

What is McConaughey’s diet and workout routine when he is not preparing for a big movie role? The actor obviously eats healthy and works out to maintain his chiseled body physique. Let’s take a brief look at how McConaughey eats and exercises on a regular basis.

What is Matthew McConaughey’s Workout Regimen?

What is Matthew McConaughey’s regular exercise routine? McConaughey’s cardio regimen will involve a four to five-mile beach run where the actor will periodically stop and complete sets of 30 push-ups at a time.

To prepare for Magic Mike Matthew McConaughey would work with celebrity trainer Gunnar Peterson who recommended two circuit-training sessions each day for six days weekly. Although McConaughey was already in good shape, his workout would focus on conditioning while maintaining a lean body mass.

McConaughey’s workout includes a weightlifting routine with short bursts of cardio exercises. It is known as Peterson’s trademark 4-5-6-6-5-4 routine. It involves participants using the treadmill for four minutes, and then performing other exercises that are five and six minutes in length.

There is no word on Matthew McConaughey’s diet for the Gold movie; however, he was clearly willing to gain a lot of weight fast for the role.

When McConaughey is prepping for a movie, the actor will eat a low-glycemic diet with foods that have a glycemic index (GI) of 55 or less. Low GI foods will slowly increase blood sugar levels and control insulin resistance and diabetes complications. Low GI diets are thought to help with weight loss, improve cholesterol levels, and prevent heart disease. Examples of low-GI foods include onions, peas, cucumbers, beans, spinach, broccoli, cabbage, and red peppers.

McConaughey will consume most of his meals in the morning. He will also consume whey protein shakes every few hours and also before and after his exercise routine. McConaughey will indulge with a glass of wine every day. Wine provides some health benefits like muscle vascularity.