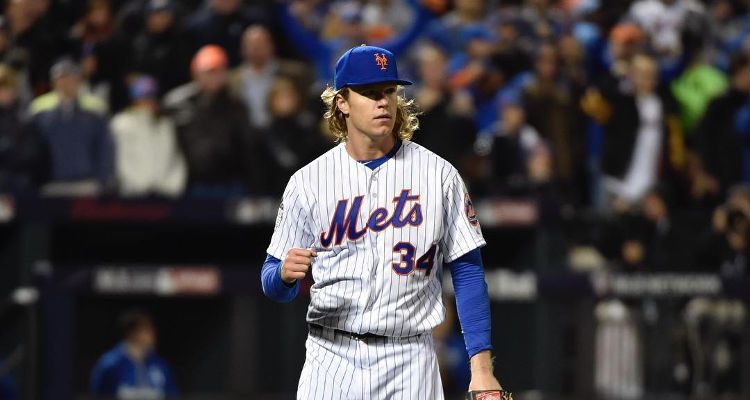 Noah Syndergaard, the New York Mets starting pitcher, was given the name Thor because he looks like a Scandinavian god.

He comes in at 6-feet 6-inches, and weighs 242 pounds; he has long blonde hair and a super chiseled physique. The pitcher is known for his incredible pitching speed that shuts down the opposing team.

Syndergaard has always been a talented player, but lately, it seems that his abilities have gone to the next level. His intense off-season training is paying off.

The 23-year-old has delivered more 100-plus mph pitches than anyone else over the course of this season, and he’s quickly rising to the top of the elite pitching group in Major League Baseball (MLB).

Josh Bryant, Syndergaard’s off-season strength and conditioning coach, says that after the 2015 season, the pitching phenom was exhausted and had only one thing in mind for the off-season: increase his strength so he could be more explosive for the 2016 season. That meant putting on about 15 pounds of pure muscle in 80 days. So Bryant prepared a four-day-a-week program that was designed to focus on Syndergaard’s most immediate physical goals—his upper back and hamstrings.

Two of my favorite things. Squats on squats today at the iron paradise @originalmetroflexgym @jailhousestrong

A shoulder and rowing workout were on the list of exercises that he did to help strengthen his upper body, as was leg training for his lower body.

Bryant didn’t worry about how much the pitcher could lift, but rather focused on Compensatory Acceleration Training (CAT), which requires a focused mindset. The loads in CAT aren’t necessarily all that challenging, but what matters in this type of training is how much effort is put into each rep. Syndergaard used CAT for moves such as deadlifts, squats, and bench presses.

Nordic leg curls were used to strengthen the hamstrings, and weighted pull-ups helped build the strength in his upper back. The CAT technique trains the fast-twitch muscle fibers and increases maximal strength without the use of heavy loads that can often cause damage to the muscles.

Another area of concern during Bryant’s training with Syndergaard was getting his arms into better shape. Arm health is important for a pitcher, since improved explosiveness and power are pointless if a pitcher’s arm isn’t working properly enough to channel the force into the baseball.

So Syndergaard did many rotator cuff exercises in the form of anti-rotational exercises, in order to help combat the asymmetries that can develop in MLB pitchers.

When training during regular season, Syndergaard has a plan that is tailored to his needs every day. That can mean doing everything from a scapular exercise, rotator cuff workout, back training, or leg training.

Every day is targeted and structured according to what his coaches thinks he needs to work on. Syndergaard has said that he finds the gym a therapeutic place.

So far “Thor” has proven his off-season training was a wise move, and the work he did seems to be paying off on the field.